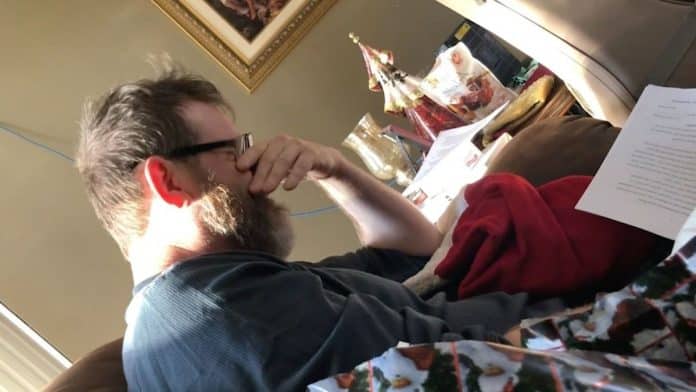 A beloved stepdad can’t fight back his tears as he reads out a note from his stepson containing a loving adult adoption request.

Chris Waters, 31, from D’Iberville, Mississippi, had been thinking about asking stepdad Sean, 51, for more than a year about adoption.

But it wasn’t until Christmas 2020 Chris decided the timing was right, and asked his younger stepbrother, Nick, to help set up a meeting with a lawyer to draft the necessary adoption paperwork.

Chris’ other stepbrother, Nate, also helped him draft the letter, which he presented to Sean on Christmas Day as members of their family began to gather.

As Sean read through the letter, he could be seen visibly welling up.

Chris is partially paralyzed along his right side and revealed Sean’s support had meant a lot to him over the years.

As Sean got to the lower part of the letter, Chris asked the big question – “Will you adopt me?” – as the stepfather began to cry.

He said: “I was nervous because itis a big thing even though I knew he’d love the gift – then I was jubilant when he said yes.

“Since sharing the video a number of people have come out expressing regret they left the idea of adoption too late.

“If people have a good, strong relationship with stepparents, I recommend definitely considering adoption papers as a gift.”