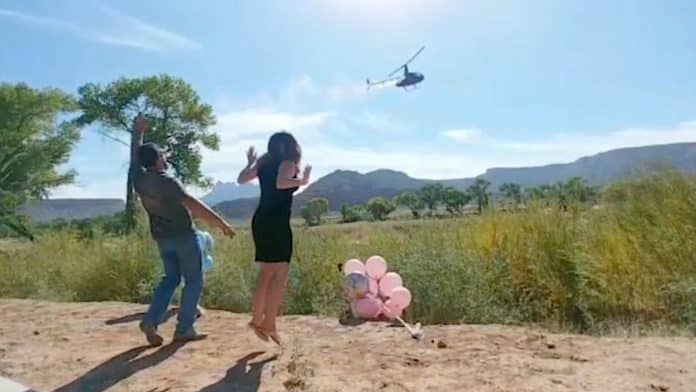 A couple who couldn’t have a gender reveal party due to restrictions took their reveal to new heights – with a pilot letting off a colored fire extinguisher from a helicopter.

Melissa and Jamie had been trying for a baby for 18 months, so when Melissa finally got pregnant, they wanted to celebrate with friends and family in Missouri over the holidays.

But due to the pandemic they decided against traveling back and started thinking of other ways they could celebrate the special moment at home in Utah, and then share it online.

One of Jamie’s friends owns Zion Helicopter company, and so Melissa came up with the idea of a fly by revealing the gender using colored fire extinguishers to make a smoke cloud.

So on a sunny day in October 2020 the couple drove out into the stunning Utah surroundings and waited patiently for the helicopter to arrive.

With the fire extinguishers securely fastened – and at a height they knew meant the smoke would evaporate way before it got close to the ground – the chopper flew overhead.

Suddenly a puff of pink smoke streaked across the sky causing the couple to jump and celebrate.

Despite a feeling they would have a boy, Melissa kept up a pattern of girls in the family – all her siblings only have daughters and Melissa and Jamie’s baby is the 7th girl in a row now.

She said: “We never had a baby shower, or a gender reveal party, or any kind of party for our baby because of COVID so I wanted to make this moment really special for us.

“My husband knows Paul, who owns Zion Helicopter, and then I came up with the colored fire extinguisher idea so I bought a pink and blue and then gave them to the pilots with the gender reveal results in a sealed envelope.

“They took it from there – the guy in the backseat that sprayed the fire extinguisher from the helicopter had it duct taped to his hands so he wouldn’t drop it.

“When the helicopter was getting closer, I felt so honored, excited, and at peace because I knew whatever the gender was that we are so blessed to be able to carry our own baby.

“We had been trying for over 18 months to have a baby.

“I thought we were having a boy up until the gender reveal, but I was wrong and it was such an amazing surprise and the video definitely shows the joy, excitement, and shock we felt.

“The feeling was indescribable when the fire extinguisher showered pink I was so happy.

“Everyone has been so happy for us. I would have loved to go on a trip back to see family and friends in Missouri in December or January to show everyone my baby bump, but we aren’t traveling because of COVID.”