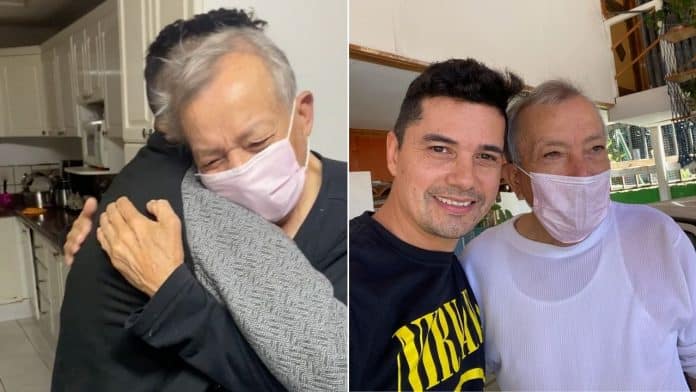 A blind man was reduced to tears when he heard the voice of his son, who had traveled to surprise him, after more than three years apart.

Danny Orias, 43, made a special visit to his father’s home, in San Jose, Costa Rica, on February 27, having previously seen his visitation plans put on hold because of the coronavirus.

It was the first time the pair had been in the same room since 2017, and Danny’s father Alexis couldn’t fight back the happy tears.

Danny had originally hoped to attend his parents’ 50th wedding anniversary with his siblings last year – but when the coronavirus hit, he was instead resigned to remaining in Fort Lauderdale, Florida, where he lives with his wife, Sharmyle.

Things began to change when Danny’s father, Alexis, was vaccinated and travel restrictions began to lift.

Danny headed to San Jose with his niece, who helped him record a series of big surprises.

First, Danny wanted to surprise his twin brother, Steve, who he had not seen since 2015.

The separation had been tough on the twins, with his brother becoming ill and depressed during the pandemic.

As Steve walked out of his front door, the sight of Danny coming down the drive immediately made him well up.

READ MORE: Adopted American Reunites With Mother Who Gave Her Up When She Was Just Six Months In Emotional Reunion

The two brothers then headed towards each other for a loving embrace that was more than five years in the making.

In order to surprise his father, who suffers from a condition called Retinitis pigmentosa, Danny headed into the living room as his niece began to record things.

As soon as Alexis heard his son’s voice, everything clicked. Danny then hugged his father, who began to cry in his arms from the emotion of the moment.

Sharmyle, Danny’s wife said: “Alexis couldn’t see Danny at all; however, he was only expecting a visit from his great niece, so Alexis was taken by complete surprise when he felt and heard Danny.

“You can see how his father is very emotional during the surprise reunion.

“Danny repeated to his dad, ‘We are all safe.'”

“People’s response to the video has been very positive and heartwarming.

“I believe that this video brings hope to people that have been separated from their family due to the pandemic – especially the elderly and disabled.

“Soon, families will be united and that things are getting better.

“It’s a matter of patience, endurance and, of course, faith.”