Home Good News Hard-Working Dad’s Eyes Fill With Tears Before Her Runs To The Driveway... 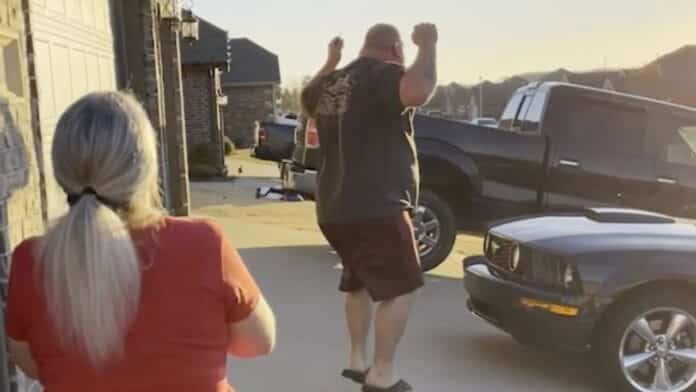 A shell-shocked dad cried happy tears before running out of his house in delight, as his family handed him a pair of car keys that let him know that they had purchased his dream car.

After being handed the keys, 45-year-old Jimmy Green began shouting, “You bought me a Mustang?!” before then realizing that he had seen the black racer on his street a little while earlier.

When everything clicked, Jimmy darted outside with tears in his eyes, leaping up and down on the driveway in pure delight.

The moment took place on Christmas Day at Jimmy’s home in Centerton, Arkansas.

According to Jimmy, a Mustang GT had always been his dream car, but he never thought he would get a chance to own one.

One day, though, Jimmy’s wife, Amy, 43, found a listing from a nice couple in Rogers, Arkansas, who were looking to sell their Mustang GT.

Amy purchased the car and hid it in a neighbor’s garage for more than a week.

The day before Christmas, Jimmy had actually clocked the black 2009 45th Anniversary edition Mustang GT at his neighbor’s house – but given that they often work on car audio systems, he thought nothing more of it.

For that reason, when news of the surprise broke, Jimmy could do nothing more than shout, “The one over there?!” as his family handed him the keys.

The beloved dad and husband said his car came with a manual transmission, so he is really looking forward to taking it out on the road for the driving experience.

He is also planning to upgrade the vehicle as he gets to know the car a little more.

On TikTok, Amy shared a video of the moment, which garnered more than three million views.

Jim said: “I was so shocked.

“My wife started to give me this nice little speech and she couldn’t even finish and started crying.

“She told me to go to my stocking, and then my daughter started crying and I had no idea why they were crying.

“So I got teary-eyed, and checking my stocking, I found the keys.

“It was the most amazing surprise.

“I honestly don’t think I have even processed it yet – it has been absolutely the most amazing experience.

“I have a hard time even processing how the video has blown up in social media.

“This is the first time anything like this has ever happened, and my wife basically put it on her TikTok to have there for us.

“It has been so unbelievable the response it has had.

“I want to thank everyone so much for all of the kind words – I am absolutely speechless!”