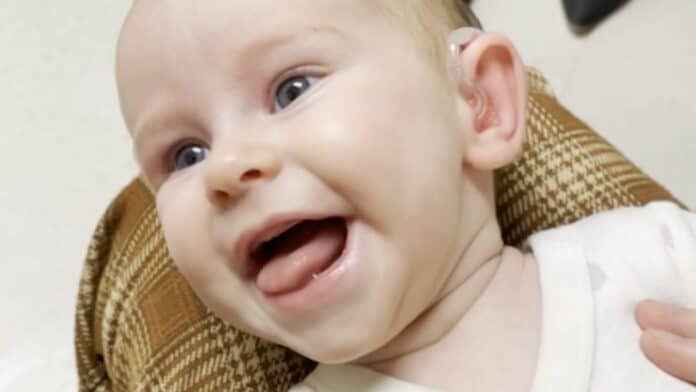 A pair of doting parents have captured the beautiful moment their deaf daughter was able to hear their voices clearly for the very first time.

Three-month-old Gigi’s face lit up when her hearing aids were flicked on and she heard the voices of her mom, Laura Lindsay, 27, and dad, Levi, 29.

The voices also soothed Gigi, stopping the youngster from crying and soon bringing a smile to her face.

The issue with Gigi’s right ear makes conversations muffled and it is difficult to hear voices and words clearly.

Such problems had initially worried Levi and Laura about the challenges that lie ahead, but once they saw their daughter’s face light up, their optimism began to rise.

Laura was initially reluctant to share the wholesome footage on social media, but in doing so she hoped to inspire other parents.

After posting the clip, Laura and Levi were met with a flood of positive comments.

Laura said: “As soon as I saw her reaction to our voices with the hearing aids it made me so happy and hopeful.

“It was a very healing moment and helped me realize she can accomplish whatever she wants in this life.

“I was initially hesitant to share the video because I wasn’t sure I was ready for the world to know but we decided to do it.

“We were flooded with so much love and support and it just felt like I was getting a giant hug.

“It has helped me so much knowing that we’re not in this alone as so many people have reached out to share their hearing loss stories.

“Every time we put Gigi’s hearing aids in and say hello she gives us the biggest, brightest smile. She loves them.”