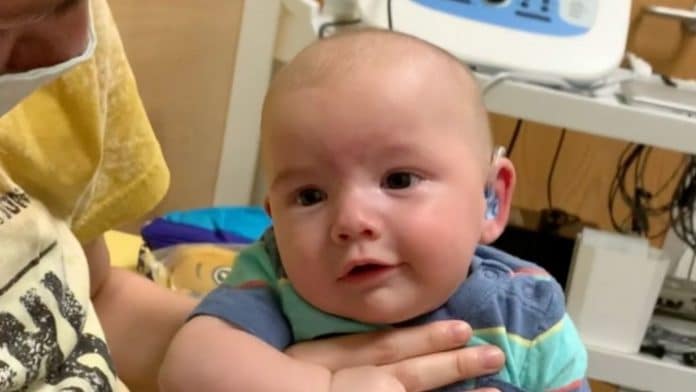 A three-month-old baby immediately stops crying when hearing the sound of his parents’ voices or the first time after having his hearing aids turned on.

Mason Barnes’ family discovered he was deaf when he was two months old leaving his parents wondering if he would ever hear their voices.

But just a few months later, at Children’s Healthcare of Atlanta, in Kennesaw, Mason was set to be fitted with his first hearing aid.

With Mason sat on her lap, mom Brooke, 24, was encouraged by staff to rock her son using her knee, given that the experience was likely to be an uncomfortable one for him.

Mason began to cry as soon as the nurse tried to fit his hearing aids – but then, once they were switched on, something magical happened.

As Brooke and her husband Jacob, 25, began to speak, Mason immediately stopped crying.

The youngster’s response left his parents shocked – so much so that Brooke decided to share a video of the moment through the family’s social media channel, The Barnes Bunch.

Brooke, from Bremen, Georgia, said: “The wait from the time we found out Mason was deaf to when he got his hearing aids was over a month.

“That entire month I felt helpless, like I couldn’t do anything – Mason was a pretty fussy baby and hard to settle most times.

“You can see how I’m rapidly shaking my leg in the video because touch was the only way to calm him.

“But seeing him calm down from hearing our voices for the first time was so relieving – especially since we weren’t sure if the hearing aids would benefit him at all.

“He became a whole different baby after getting his aids you could see how much he enjoyed taking in all the sounds around him that he had never heard before.”

The fitting took place on July 15, 2020, but it wasn’t until recently that Brooke decided to share a video of the moment on social media.

Since then, Mason has been fitted with a cochlear implant, allowing him to hear even more sounds.

Brooke added: “I love connecting with other parents about their child’s hearing loss – it can be such a dark time, and I love sharing our story to reassure others that it will be okay.”