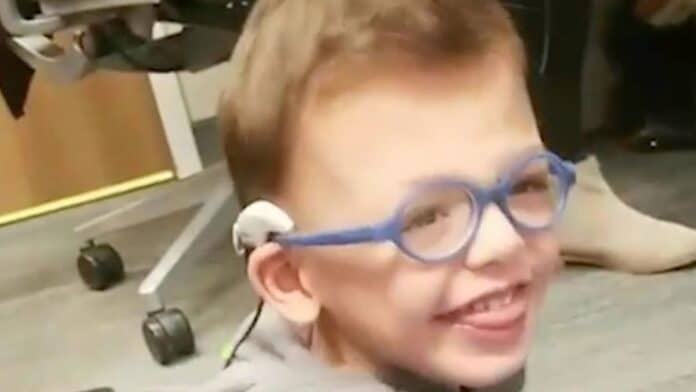 A young boy beat the ground with excitement as his cochlear implant was activated – helping him hear his parent’s voices clearly for the first time.

Neil Vazquez spent 25 weeks in the NICU after being diagnosed with a severe bilateral bran bleed and cysts, which developed on his brain tissue.

It meant at just weeks old, he was fitted with a shunt, which helps keep him alive.

After Neil kept failing his hearing tests, his parents Kelsi and Louie faced an agonizing decision over whether to have a cochlear implant fitted.

The biggest risk was that the implant would be located near to where the shunt is, increasing the likelihood of it interfering.

But after agreeing to go forward with cochlear implants, the family traveled to a different state to find a surgeon who felt comfortable working with Neil’s unique situation.

Once the surgery was complete, the family had to wait a month before they could finally activate the implants and see if it was a success.

On December 16th, 2019, when Neil was aged two, the implants were activated at a low volume to help him adjust.

As soon as they turned on, he started smiling and giggling as he finally heard his parent’s voices.

As the sounds began filtering it, things became overwhelming for Neil, so they spent the next few months adjusting the volume until he felt comfortable.

Nowadays, the first thing Neil asks for every morning is his ‘ears’.

His favorite thing to do is sing along to nursery rhymes in the car and play with his younger brother Luke.

READ MORE: Toddler Dances As She Hears The Sounds Of Her Favorite Toys For First Time After Implants Are Activated

Doctors, therapists, and teachers have continued to tell Kelsi and Louie that he is determined to succeed and do things that other kids his age can do.

Keslie, who decided to share the special moment Neil, now aged four, finally heard for the first time, said: “My husband and I always talk about how hard it is having a special needs child, but now we would not change this experience and having Neil for anything.

“We have grown stronger, learned how to be an advocate, it taught us to learn more for ourselves, love harder and it opened our eyes to a new world.

“Having a special needs child takes work, and keeps us on our toes, but it makes us better humans because of it.

“Getting two cochlear implants was one of the best decisions we ever made.”