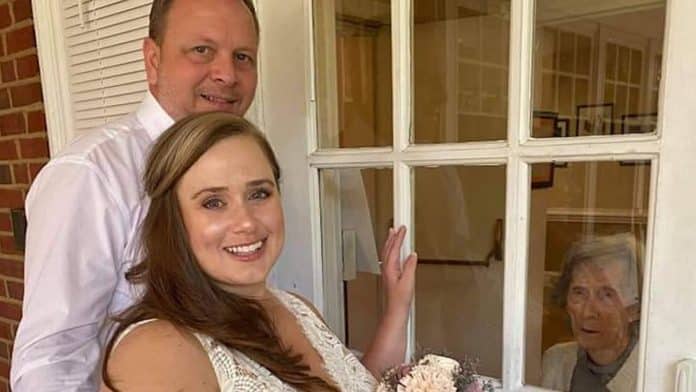 A pair of newlyweds undertook a beautiful gesture for the bride’s grandmother, by getting married for the second time so she could attend a private ceremony.

Virginia Cannon, 90, was brought to tears when she watched her granddaughter, also named Virginia, and husband Harvey Sydnor marry through the window of her care facility in Richmond, Virginia.

Harvey, 51, and Virginia, 36, initially tied the knot on October 10, 2020 – but when Virginia’s grandmother couldn’t attend because of health reasons and the pandemic, the couple wanted to do everything they could to make sure she did not miss out on wedding.

The younger Virginia spoke to the care home’s activities director, Christina Stott, to see if there was anything extra that could be done.

Though Virginia could not leave the facility, Christina suggested that they host a mock wedding at the center.

A week after the original ceremony had taken place, Virginia and Harvey headed to the facility along with a vicar, on October 18, to repeat the ceremony.

Harvey, from Richmond, Virginia, said: “At first, I was just going through the motions of the ceremony.

“It wasn’t until later that I could see her grandmother’s reactions.

“It brings tears to my eyes every time I see the video and the joy in her voice to see her granddaughter walking down the aisle.

“No matter what situation you are in, make the best of it.

“Keep others’ feelings and health in mind.