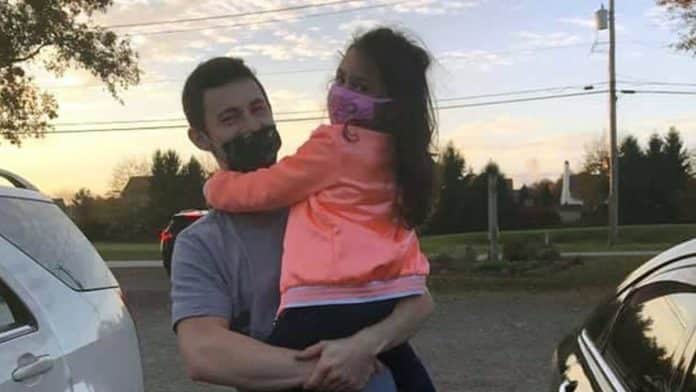 A caring stepdad received the birthday surprise of a lifetime as his five-year-old stepdaughter surprised him by revealing a t-shirt asking if she could take his last name.

Michael Hodkinson, 24, had no idea the big surprise – which would include him legally adopting Maddalena Hodkinson – was coming, as he celebrated in a Pennsylvania restaurant.

Michael met Maddalena’s mom, Nicole, 24, almost four years ago, and so for the formative years of her life, Maddalena came to see Michael as a father figure.

As a result, Nicole said she wanted Michael to eventually adopt her daughter, so she worked on a surprise plan with Michael’s brother, John, who works at the Sedona Taphouse.

On October 16, 2020, Nicole went to the bar’s bathroom before coming back and being seated with Maddalena.

It was at that point that John came to the table and told Michael that Nicole had “dropped something” on her way back, presenting him with a piece of paper.

As Michael read through the note, it explained the gratitude Maddalena had for her stepfather, thanking him for raising her.

The letter then prompted Michael to then look at Maddalena’s t-shirt, which, on the front, read: “Daddy. Will you…”

As Maddalena then showed him the other side, the t-shirt stated, “Give me your last name?”

The gesture immediately caused Michael to start crying happy tears at the table, with his birthday cake sparkling and friends and family members watching on.

Maddalena then headed around the other side of the table, where she gave her stepdad a big hug.

Nicole shared the moment on social media, where her post received hundreds of thousands of views and likes.

Michael, from Pottstown, Pennsylvania, said: “I was shocked when I was handed the letter.

“I looked up at Maddalena after reading the letter – I was in instant shock and started crying, of course saying ‘yes.’

“The one message I hope people take from this story is simple. Some people are standoff-ish when it comes to women with children or a child.

“I ended up loving Maddalena just as much as I do Nicole.”