Home Good News Sisters-In-Law Play Prank On Their Husbands By Purchasing Them The Exact Same... 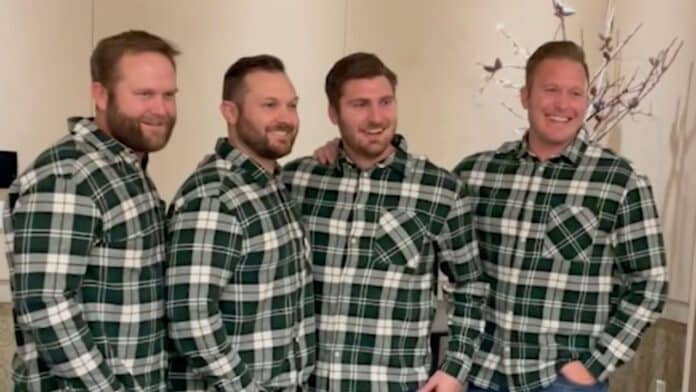 A group of close sisters-in-law played an incredible prank on their four husbands, as they each purchased the brothers the same shirt to wear to a large family gathering.

In the hilarious video, brothers Justin, Skyler, Jesse and Blake Ence can be seen arriving at the family gathering in Utah in the same green plaid shirt.

One by one, the brothers started to meet each other, first laughing at the coincidence that two of them might have the same shirt, only to then clock what was happening as more of them entered the room.

The wholesome moments were captured on video by sisters-in-law Jesslin, Alisa, Alyssa and Brittany, who said they are extremely close and often prank their husbands together.

On this occasion, Jesslin said, the idea was thrown together just four hours before the gathering on December 20.

The sisters-in-law were together in a local store, saw the shirts, and decided they would convince their husbands to wear them to the party.

In the build-up to the event, Jesslin added, the four wives were “dying inside” as this was not a small party, which would make the brothers’ choice of attire even funnier.

Jesslin, who later shared a compilation of the greetings on social media, said: “We knew most of the brothers would be good sports about it when they found out… they are just so vocal that we knew, regardless, it would be funny the way they responded.

“When it was all unfolding, everyone there was busting up, as one by one the brothers came in and noticed the same shirt.

“Their mom had no idea what we’d done and when she saw it her laugh was the loudest. She loved it!

“We were all camera-ready to capture the moments, and most husbands turned around, like, ‘Really babe?’, saying, ‘Are you kidding me?’

“That was except for my husband, who was amped to match – we call him the golden retriever of the family.

“I guess what we want others to take from this story is to spread laughter, keep life enjoyable, spend time with family because families are forever.”