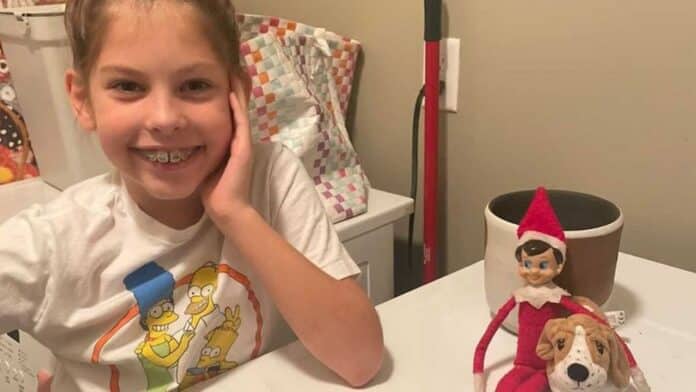 A young girl who had left her toy elf behind was given a festive surprise when he took an Uber ride to return to her.

In the wholesome video, shared by nine-year-old Layla’s mom, Jessica Morrow, 33, the toy elf named Winston can initially be seen getting placed into the back seat of an Uber and buckled in.

Then, on the other end of the ride, Layla’s father recorded his daughter’s reaction as she headed outside and opened the door of the vehicle, discovering her beloved toy.

Layla’s parents live separately, and when Layla travels between them, she often brings Winston with her.

Earlier this month on December 6, however, Jessica and her husband, Trevor, had forgotten to transfer Winston, and so Jessica, from Kansas City, Missouri, decided to call a ride for the Elf On A Shelf-themed toy.

Jessica said the Uber driver couldn’t have been kinder, and when speaking to Layla, Jessica said that Winston wanted to take an Uber and had left her a note to help him because his Elf Phone wasn’t working.

When the elf arrived – along with his night bag – a shocked Layla asked, “Winston, what are you doing here?”

READ MORE: Toddler Dances As She Hears The Sounds Of Her Favorite Toys For First Time After Implants Are Activated

Jessica later shared the video on social media, with the post going viral and being viewed around three million times.

She said: “I knew Uber had a package delivery option and it was only $8 for the ‘ride,’ so I thought it would be funny to get her dad in on it and make it a special moment for Layla.

“My friend filmed my end and I gave her dad the heads up so he could film her reaction.

“We got so lucky with the best Uber driver.

“She was so fun and down to make it a special moment.

“I was telling my girlfriend that I hoped we got a driver with the holiday spirit, so I was so happy that she was so excited.

“Our kids get desensitized so early, so keeping the magic of Christmas and childhood alive is so important and special.

“To see her face light up with surprise – I was celebrating a Mom Win.”