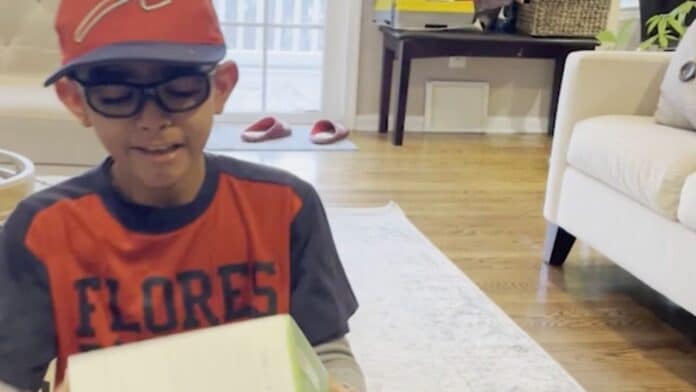 A hard-working nine-year-old had a wholesome and tear-filled reaction when his parents surprised him with an Xbox – a gift that was two years in the making after he focused hard on his studies.

Rehan Rawal had been telling his parents for the last couple of years that he really wanted the games console, but they both emphasized that his focus should really be on his school work.

During that time, Rehan put all of his efforts into his studies, also focusing on his after-school activities and his love of baseball.

This Christmas, however, Rehan’s list was extra short, consisting simply of “Xbox” and “baseball stuff.”

Since he had performed so well in his studies, Rehan’s mom, Chilka, 40, from Pompton Lakes, New Jersey, decided to Google the consoles.

She came across an Xbox One Series S console, which she hoped to give to Rehan as a Christmas present.

But when Rehan was selected for a nationwide baseball tournament in Florida, due to take place over the holidays, Chilka decided to give the console to Rehan for his birthday instead.

On December 10, the nine-year-old entered his family’s living room before school, where he came across a tied black trash bag.

As soon as Rehan had opened the bag, he knew exactly what was staring back at him.

READ MORE: Girlfriend Surprises Long-Distance Boyfriend By Dressing Up As Amazon Delivery Driver And Asking Him To Sign For His Birthday Gift

In complete shock, the youngster welled up, putting his hands on his head and walking around the room in disbelief.

Over and over again, Rehan then repeated the words “thank you” as he tearfully went across to hug his mother and father.

Chilka said: “Man! His reaction was everything – I was holding back tears.

“It was the purest, most innocent reaction from the heart.

“You can hear him say, ‘no way, this can’t be real’ and ‘thank you’ and after the recording he kept saying this is a dream, right?

“We try to get the kids whatever they want within reason while teaching them the value of things and that it doesn’t just come to them; they have to work for it and earn things.

“This was a huge accomplishment for him, two years in the making.”