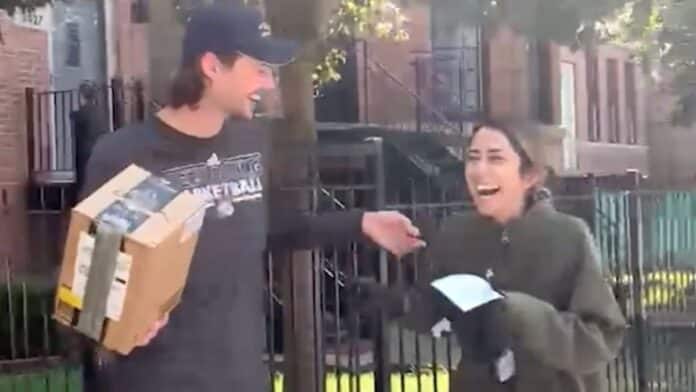 A stunned boyfriend got quite a shock when his long-distance girlfriend surprised him as an Amazon delivery driver.

Niki Bayat, 24, contacted her boyfriend Nick and told him that a package would be arriving at his Chicago, Illinois, home as a birthday treat.

After Nick had opened the door, he headed to the sidewalk to sign for his package, which Niki, who had traveled from Boston, was holding.

The 24-year-old hid her identity by dressing in a facemask, sunglasses and a hat, and in the distance her sister, Donna, secretly filmed the moment.

Nick had no idea it was his girlfriend handing him the package, Niki said, and Donna could not stop laughing as tears streamed down her face.

READ MORE: “My Baby!!”: Mom Darts Across Family Gathering With Tears In Her Eyes For Surprise Reunion With Son Who She Has Not Seen Since He Was Three Years Old

Niki and Nick are currently studying to be optometrists, and the couple met through a Pink Floyd fan page that Niki runs.

Several years ago, Niki posted a photo of some Pink Floyd eye art to the account and explained that she was in optometry school studying to be an eye doctor.

Liking the same band and having the same career ambitions, Nick messaged Niki and the couple met in person after the pandemic.

Niki said: “While flying there I came up with the fun idea to surprise Nick disguised as an Amazon delivery person, rather than just showing up at his door as myself.

“It turned out even better than I could have imagined!

“My sister and I could not stop laughing the entire time – tears were rolling down our faces.

“We kind of went into this without much of a plan and were just curious to see what would happen.

“But seeing that I was disguised so well that even my boyfriend couldn’t tell it was me was hilarious.”