Home Good News Grandma Who Spent Childhood In New York And Loves The Rockettes Is... 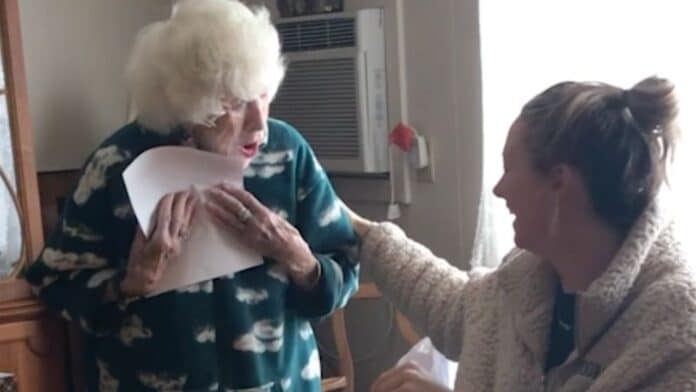 A 96-year-old grandma who was born in New York has gone viral after her granddaughter surprised her with a return trip to the Big Apple more than seven decades after she left.

The moment aptly took place after Patricia Hoefling had watched The Rockettes on TV, reminiscing about her younger years in the city and her love of the holiday season dance group.

Patricia was born in Greenwich Village in 1925, and after attending college outside of the city, she eventually left in 1946.

Granddaughter Shelby Hoefling, 30, had often chatted to Patricia about her love of the Rockettes, and so she decided to plan a festive surprise.

Shelby thought Thanksgiving would be the perfect time, as the group was set to perform in the Macy’s Day Parade.

After Patricia had watched the group on TV, Shelby presented her grandmother with the gift.

There was a series of envelopes spelling out New York; an envelope with Rockettes tickets inside; and additional hints at the Rockefeller Center Christmas tree, bagel spots, and a return visit to Greenwich Village.

The gesture brought the 96-year-old to tears with Patricia’s family capturing the moment on video.

The following day, Shelby and Patricia readied themselves before heading to the city for a long weekend.

Shelby recorded the pair’s travels, with Patricia getting to meet the Rockettes before one of their shows at Radio City Music Hall.

Patricia was also made to feel like a celebrity, too: the day before, Shelby had posted a video of her ticket surprise on TikTok, seeing the moment go viral.

READ MORE LIKE THIS: Mom Hysterical As Daughter And Her Husband Surprise Her With First Trip Abroad – The Very Next Day – On Her 60th Birthday

As the 96-year-old met the dancers, people shouted “Nanny!” as she walked past, Shelby said.

She added: “I was really nervous because surprising someone who is 96 can be a little nerve racking – but I wanted to make it the ultimate surprise.

“When I saw her reaction, I was so happy.

“I knew in the moment that she was so excited that I had done the right thing by booking this trip and making it happen.

“Watching my Nanny happy fills my heart with so much happiness.

“I live to make her happy, honestly.

“She said the weekend was absolute magic.

“That’s the word we used the entire weekend: ‘It was magic.’

“She also was extremely touched by the Rockettes’ generosity – she kept saying she had no idea how they found the time to meet with us and was so touched with how much they cared and how nice every single person in New York was.”