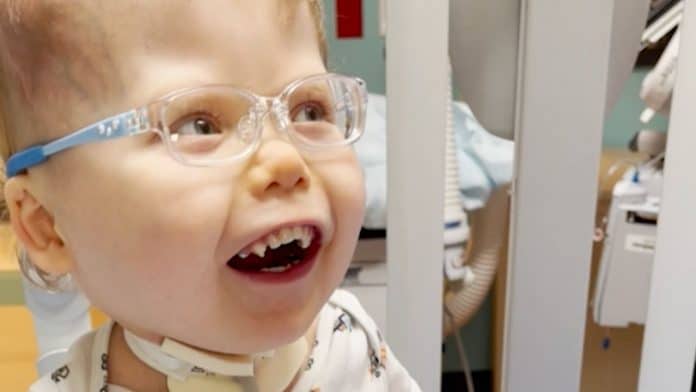 A toddler with special needs beams with joy as he tries on a pair of glasses and sees his parents’ faces for the first time.

Jaxon, aged three, has a chromosomal abnormality know as DiGeorge syndrome, which, more correctly, is a 22q11.2 deletion.

He is missing a small piece of his 22nd chromosome, and that missing information can cause many abnormalities.

As a result of his condition, Jaxon has had to undergo two heart surgeries and will have at least two more in the future; he also spent the first 255 days of his life in the hospital.

READ MORE: Mom Buys Special Glasses So Her Son Can See The Colors Of Nature For First Time

Jaxon’s parents, Charles Emberton and wife Cassie Booth, said they initially struggled to believe their son’s eyesight was that bad, but after taking him for a second opinion they were advised about the strong variety of lenses he would need.

And so, on April 13, at Children’s of Alabama, Charles was able to help Jaxon try on his new glasses for the first time with his face immediately lighting up.

Charles said Jaxon’s reaction proved the world had now opened up for him.

By sharing videos such as this, Charles and Cassie hope to raise awareness of their son’s unique condition.

The family are currently raising funds for a new vehicle, which will help accommodate Jaxon’s wheelchair and equipment as he grows older and have a GoFundMe page.

Charles said: “Once we put those glasses on him it was one of the most amazing moments.

“Seeing his little face light up when the world opened up for him was all the confirmation we needed that the glasses were exactly what he needed.

“His smile has captured the hearts of so many on social media – I remember looking at the video the next morning and seeing how many views he’d already gotten and we were floored.

“It’s amazing to read all the comments and see just how his smile can brighten someone’s day.”

More information about Jaxon’s condition can be found out here: 22qfamilyfoundation.org