Home Good News Soldier Out Of Coronavirus Quarantine After Returning From Nine-Month Deployment Reunites With... 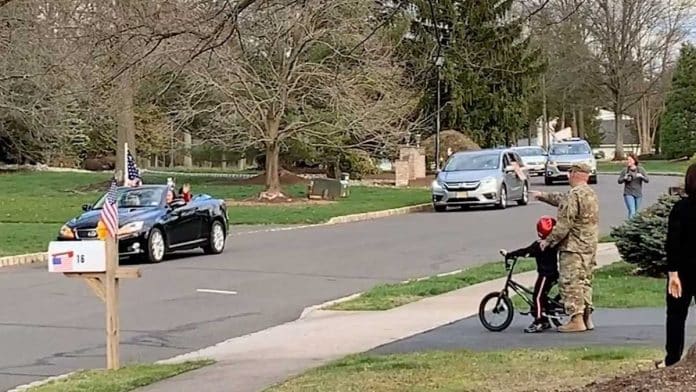 A soldier returning home after a nine-month deployment overseas and two weeks in coronavirus quarantine received a surprise 100-car parade just minutes after his return.

With the COVID-19 pandemic preventing large-scale gatherings, friends, family and neighbors of Lt. Col. Rob Movshin got creative in their show of appreciation for the returning soldier, who had been serving overseas in Kosovo.

When he returned to his home in Hillsborough, New Jersey, on April 4, Rob, 45, stood on the end of his driveway with his family as car after car began to show up.

Horns honked and sirens screeched, as the local community turned out to show their love and support for Rob, a member of the New Jersey Army National Guard.

The likes of the local fire service also got involved, while other families made signs and banners to display to the lieutenant as they rolled by.

The plan was devised by Rob’s wife, Diane, who said she wanted to make the moment special for Rob and took inspiration from similar parades elsewhere in the U.S.

Diane was in contact with Rob’s friend, Scott McCauley, throughout the day, planning the parade to head past at just the right time.

Rob had returned to the U.S. two weeks prior, but because of the coronavirus, he and his unit, numbering 150 soldiers, were required to quarantine in a government facility in New Mexico.

Rob said: “I felt beyond humbled, loved, and appreciative to live in such a great town.

“I have such good friends, and was welcomed by all my family.

“The response to the surprise has been incredibly positive – I was happy to share a little joy during these uncertain times.

“I, along with all those I served with and others stationed elsewhere, amjust happy to be home and proud to serve these United States of America.”