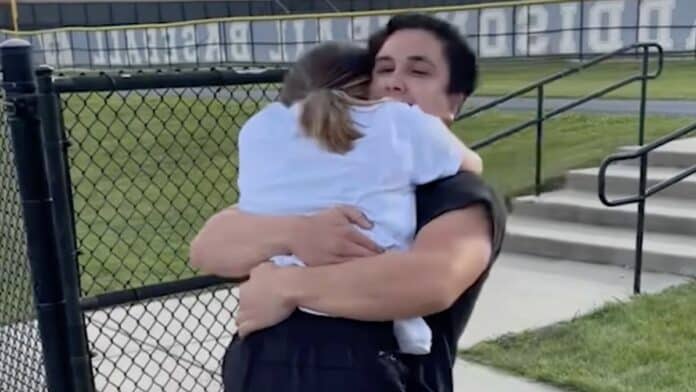 A girl couldn’t believe her eyes as she was reunited with her Navy brother at her football training by leaping into his arms.

Jasmari Look, 15, hadn’t seen her brother Justin for a year and a half due to his deployment as an Ordinance in the US Navy.

Whilst on deployment, Justin had to message his sister the sad news that he wouldn’t be able to attend her quinceañera.

Due to the pandemic, Jasmari had already missed her 8th-grade graduation, her 1st year in high school, her 1st high school dance all while not being able to see her brother.

What Jasmari didn’t know was that mom, Margarita, had been organizing a surprise with Justin for the past week.

On August 23rd, 2021, Jasmari was at her usual football practice at school in Addison, Chicago, when she spotted her brother stood at the side watching.

As soon as she saw him, she instantly ran over as fast as she could, leaping over the fence, and straight into his arms for a well-needed hug.

Days later, on August 27th, the family got together to celebrate Jasmari’s quinceañera.

Jasmari said: “At first I was really mad that he told me he could not come home but then I was really happy and very emotional.”

Justin said: “I was emotional, ecstatic and proud of my sister.”