Home Good News Girl Surprised With Christmas Adoption By Family Who Took Her In During... 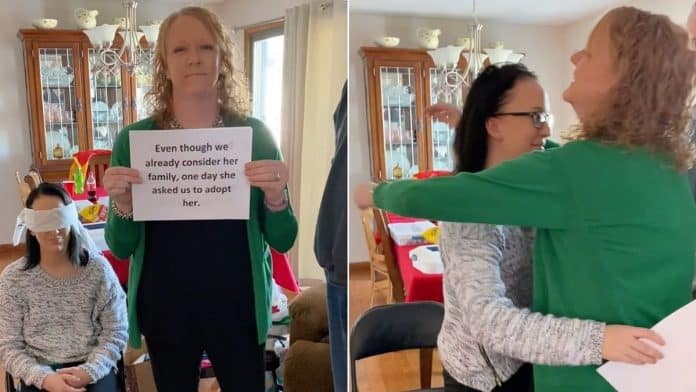 A loving nurse who once provided a stranded teenager with a ride and place to stay for the night surprised her with adoption papers on Christmas Eve, having since taken her into her care.

Back in the summer of 2020, 18-year-old Zoe Williamson walked into the Iowa hospital where Marie Nelson works as an ER nurse.

Zoe explained to those in the emergency room that she had aged out of her foster care system and, with nowhere to go, she had previously tried to patch things up with her mother.

Marie, 39, overhead Zoe’s claims, and when she found out another relative Zoe was hoping to stay with was based in the area where her daughter had a softball game the following day, she suggested Zoe stay with her family for the night so that she could give her a ride.

Zoe agreed, and having visited the Nelsons, in Elk Horn, Iowa, Zoe then stayed in contact with Marie’s daughter, Mia, over the summer.

In September, though, Marie received a message to say Zoe was in the hospital again, suffering from a mental health crisis and with no-one left to turn to.

With Zoe hoping to go back into the care system voluntarily, Marie suggested that she come and live with her family for some time, giving her a stable place to live to allow her to finish her senior year of high school.

Zoe agreed, and over the months that followed, the 18-year-old fitted perfectly into the Nelson’s family, Marie said, as they have watched her grow as a person.

During that time, Zoe also joked that she wanted to be adopted so she would be “stuck with us forever,” Marie said.

She and her husband, Jeff, began discussing the idea, and, having agreed it would be best for Zoe, they then secretly paid for the adoption documents to be drawn up.

On Christmas Eve, the couple’s other daughters, Ansleigh and Hannah, came up with a plan to blindfold Zoe and tell her she was to be given a present that could not be wrapped.

They also decided to record the moment, with Marie, who was standing next to a blindfolded Zoe, silently revealing on cards a description of the moment that was about to unfold.

With Marie finishing the card-turning, in a scene similar to the Christmas movie “Love Actually,” Zoe was then instructed to remove her blindfold as Marie presented her with the adoption papers.

The 18-year-old was overwhelmed with emotion, heading straight into her soon-to-be-adopted mother’s arms.

Marie said: “Our hearts were so full seeing how happy she was.

“We just love her so much.

“There wasn’t a dry eye in the room – it was perfect.

“It is possible to love somebody else’s child.

“There are so many kids and teenagers out there that need somebody to care and help them through this thing called life.

“And chances are, they will help you grow as much as you help them.”