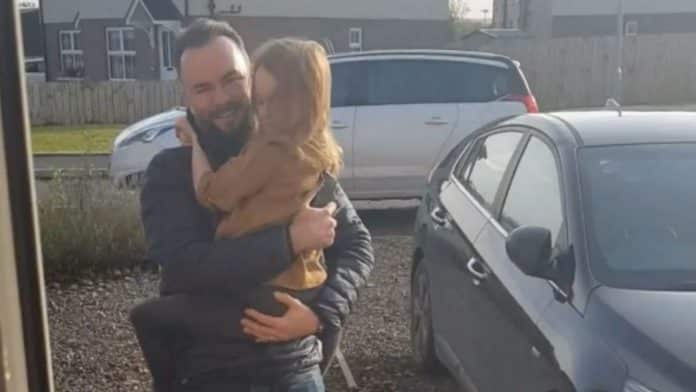 A little girl anxiously waits at her living room window for the arrival of her dad who she hasn’t seen in 10 months due to COVID restrictions – before charging outside into his arms.

Maddie Magee, aged seven, had been separated from father Ruairi, 36, who lives in Dubai for almost a year due to the pandemic.

She last saw her dad over Christmas 2019, and as COVID restrictions took hold earlier this year, Maddie was left devastated when trips to Dubai and Scotland to visit Ruairi canceled.

But on October 24, Ruairi was headed home to Northern Ireland, and ahead of his arrival, Maddie was so excited she headed to her window, climbed on the radiator and peered out.

The pair then spent the next eight days together before Ruairi headed back to the Middle East.

Pauline said: “It was so lovely – I held myself together until she left but had a little cry after and even more so when I edited her video that night it was emotional stuff.

“I was so happy for her, as video calls just aren’t the same thing.

“I only shared the video with close family and friends, and they were all really emotional – I think they had all forgotten what little Maddie had been dealing with this whole time.

“Children are incredibly resilient; they can handle more than you think.

“Mums and dads shouldn’t beat themselves up so much we are all trying our best in these weird circumstances, as long as the children are happy and healthy, we are doing a great job.”