Home Good News Classmates Of Girl With Cerebral Palsy Won’t Leave School Until Each Have... 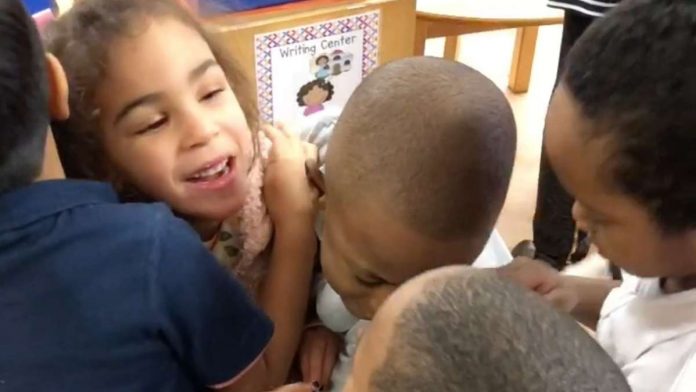 Classmates of a young girl with cerebral palsy have created an adorable end-of-day routine insisting on giving her a hug every day before they will leave school.

Miriam Echlin, aged four, moved from her special education class at Bruce Elementary in Memphis, Tennessee, to the mainstream class for her age.

Having instantly made friends with her 20-or-so new classmates, they started encouraging and cheering on just about anything she progressed in – and soon followed with hugs and high fives every pick up.

Mom Alli Echlin, 38, captured her daughter’s sweet interactions on video during a pick up last month.

In the video, Miriam’s classmates can be seen coming up to her one by one for a hug – only for them all to start gathering for somewhat of a group embrace.

Miriam was adopted at birth and over time it became clear she was missing key milestones, Alli said, and Miriam also began to have seizures.

She was diagnosed with cerebral palsy and is mostly non-verbal, using some sounds and sign language to communicate.

That has not stopped her from communicating her fondness for her classmates, however, and Alli said her daughter comprehends above her level.

Alli also runs a social media account, Mighty Miriam, through which she hopes to educate others about her daughter’s condition and matters of inclusion.

She said: “One of Miriam’s greatest joys in life is to be a friend and to have a friend.

“She has a deep desire to be social and make new friends and despite her challenges, she lets absolutely nothing get in her way.

“The video and Miriam’s routine started and continued a very important conversation about inclusion and kindness.

“The message we strive to deliver every day through this video and our own social media platform is that inclusion matters, kindness matters, and making friends is an adventure that everyone deserves.

“We hope to expose and expound upon the truth that being different is good, because we are all different.”

Principal at Bruce Elementary, Archie Moss Jr., added: “At Bruce, one of our core values is community.

“I hope people will understand we must embrace everyone’s differences and make sure they feel cared for and loved – we want every student to feel they belong and are safe and loved at all times.

“Everyone has embraced Miriam and her parents in our building and within our community, the positive story was able to highlight the way we treat one another in our building.

“The staff and community responded to the story in a positive way and really shared the story with all they came in contact with.”