Home Good News Loving Stepfather Who Has Cared For 19-year-old For 16 Years Surprises Her... 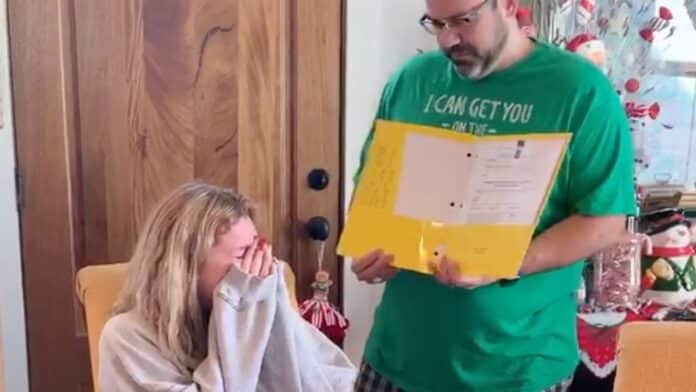 An unsuspecting woman whose stepfather has looked after her for the majority of her life was stunned recently when she was surprised with a series of adult adoption papers.

Sat cross-legged on a chair while her stepfather, Brandon Chinchilla, 43, gave a speech, Savanna Guise, 19, had no idea what was to come next.

Holding a document wallet in his hand, Brandon lovingly explained to Savanna, “You have always been my daughter – I never thought of you as anything else but my daughter.”

As Savanna then began to cry during the Christmas Day surprise, Brandon declared, “Unfortunately, the courts don’t look at it that way,” and he presented Savanna with the adult adoption papers.

The pair, both sobbing hysterically, then hugged in Brandon’s parent’s home, in Mansfield, Texas.

Having cared for Savanna for more than 16 years, Brandon said that it was difficult for him and his wife, Tiffany Chinchilla, 45, because their daughter always had a different name.

The couple also has a son together – Kaden, 15 – who does share their surname.

Having discussed the adoption with Tiffany, Brandon said he found the necessary paperwork through a county court’s website and, having filed the forms, the family is in the process of setting a court date within the next few weeks.

Brandon said: “Savanna had no idea that this was about to happen so her reaction is truly genuine.

“It’s funny, but I rarely see my daughter cry; she’s very strong and tough as nails.

“So in that moment, I knew I had to keep it together because I wanted to get out everything I wanted to say to her.

“I think at the end you can hear it in my voice that I almost didn’t make it because her reaction was so priceless.

“Savanna and I have always had a great relationship.

“She has always valued my opinion and feedback and has told me in the past that she worries she’s going to disappoint me.

“I’ve always told her – just like in the video – that as my daughter there’s virtually nothing she could do that would disappoint me.”