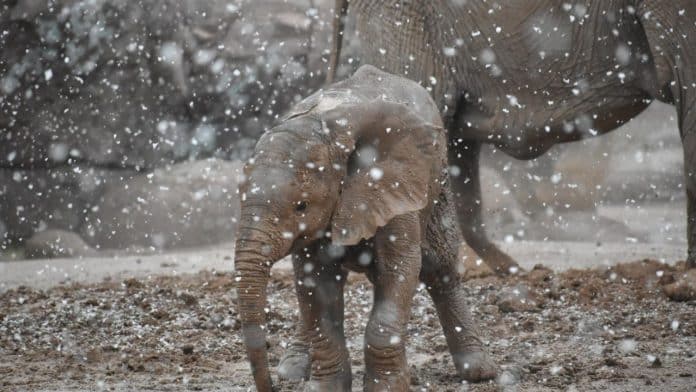 An adorable baby elephant could not hide her delight (and surprise) when she got to experience snowfall for the first time recently.

Penzi, a nearly-nine-month-old calf who was born on April 6, 2020, was more than happy to roll around in the snow and slush as it formed on the ground at Reid Park Zoo, in Tucson, Arizona.

The moment took place on January 26, when rare snowfall reached Tucson and most of the other zoo animals were happy to stay inside their heated home.

But Penzi, her sister Nandia, and the rest of the elephant herd had a blast outdoors, captured on camera by zoo staff.

Dr. Sue Tygielski, Director of Zoological Operations: “A weather event can always be exciting for the elephants, but a first snow is always special for a baby elephant.

“Penzi took the snowflakes as a cue to play in the stream and slip and slide in the mud. “Even her older sister, Nandi, could not resist a roll in the mud on a snowy day.”