Home Good News Boy Brings Military ‘Daddy Doll’ To Daycare Only To Be Surprised By... 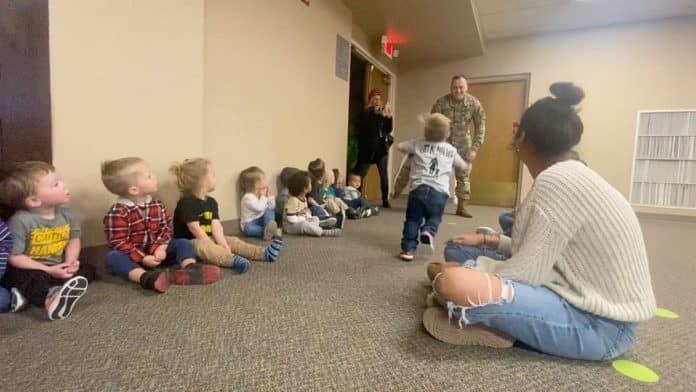 A boy who brought his military ‘daddy doll’ to show his friends at daycare was left stunned when his real dad walked in to surprise him after returning from a year-long deployment.

Three-year-old Tatum decided to bring his Daddy Doll of his father to his daycare center in Lincoln, Nebraska, where he was invited up in front of his peers to show and explain the toy.

Michael had been on a year-long deployment with the US Air Force at the Incirlik Air Base in Turkey from December 2018 until December 2019.

On December 11, 2019, in front of his class, Tatum was then asked by Ms. Johnson if he knew when his father was going to be home, and if he missed him.

Finally, Tatum was asked what he would do if he saw his father right at that very moment, to which he confirmed he would give him a “big squeeze.”

In the corner of the room the fire exit door flung open, and in walked a delighted Michael into the Kids First Daycare Center.

A shocked Tatum immediately rose to his feet, running over to his father to give him a big hug.

According to his mom Brittany, 35, the deployment had been tough on Tatum and many nights he would cry because he wanted his father.

That was one of the reason’s the family purchased the Daddy Doll as it helped Tatum cope with the absence of his father.

In 2020, the family are all relocating to a naval station in Sicily, Italy, bringing a sense of relief that they can all be together again as a family.

Brittany said: “The past year being separated was the hardest on our whole family, yes my husband chose this career but my sons didn’t get a choice.

“It’s a hard life at times with the goodbyes but in the end, we stand by my husband in his choice to fight for this country and we couldn’t be prouder of him.

“Seeing the moment unfold my first thoughts were this was it, my son doesn’t have to say goodbye to his Dada anymore – we would all be together again and start our new life in Italy.

“What I hope people see from the video is the reality of a military child’s life. Tatum who is 3 years old has been away from his dad half of his life already.

“Lots of tears have been shed over that video, I know, the response has been great.”