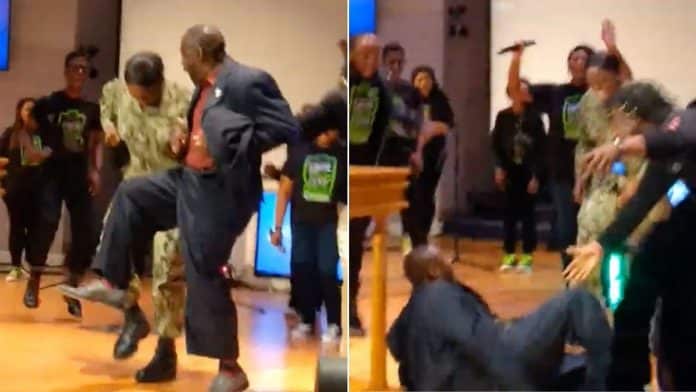 A stunned dad hilariously falls over in shock while dancing as his Navy daughter surprises him by returning home early after two years.

Jadiah Monday serves with the U.S. Navy and has been based in Japan the past two years, but when she was due home she plotted with her mom and brother to surprise her dad Jerome.

A week before he expected his daughter home, Jadiah was actually already back in Georgia speaking to him from a hotel pretending to still be in Japan.

Later that day, while at church in Jonesboro, Jerome was dancing during high praise and was invited up on stage by the pastor.

While mid-dance, Jadiah and her brother Isaac appear from the back of the stage and start dancing next to Jerome who doesn’t immediately notice what is happening.

After taking a glance at Jadiah he continues dancing, but suddenly turns back to look at her properly and then in complete shock begins stumbling backwards and falls over.

Once he regains his composure and is helped back to his feet, Jerome picks his daughter up and gives her a long hug, before the pair continue dancing.

Isaac said: “My sister Jadiah has been in Japan for the past two years.

“With the thought of surprising my dad, my mom, sister and I decided it would be cool if she came home a week early and make it a huge surprise at church.

“After telling my dad she’d be home on March 2, he had no idea what was about to happen.

“She spoke with my dad that morning at our hotel as if she was still in Japan and he was clueless as to what was about to take place.

“With the help of our youth pastor at Divine Faith Ministries International, TaVondria Battle, she helped set him up on the stage.

“She called him up to dance in front of the church in the midst of high praise. Without thought he ran upon the stage not knowing that he was about to have the fall of his life.

“As he began to dance, my sister and I ran from the back of the stage and began to dance with him – he still had no idea that it was her.

“He claims to have looked down and thought to himself ‘hmm somebody has on some fatigues’ but when he looked up he was in such shock to see his daughter, it threw him to the ground.”