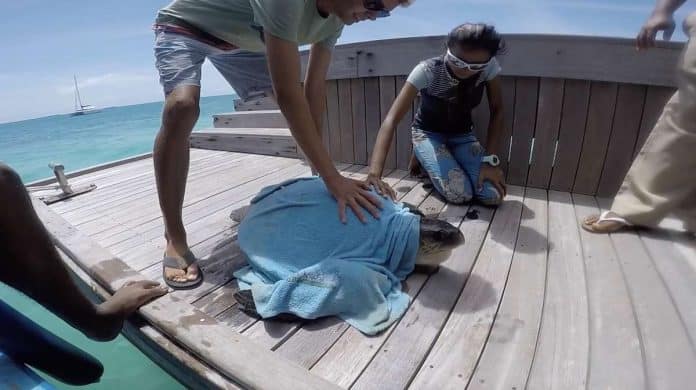 An Olive Ridley turtle with a badly damaged front-right flipper was plucked from the ocean by a group of scientists and taken to a rehabilitation centre where she was nursed back to health and released.

The stricken female turtle was spotted in the middle of the ocean by a group of researchers aboard a boat conducting studies on Whale Sharks off the coast of the Maldives.

As soon as they spotted the turtle struggling to swim, they diverted their ship to help pluck the badly injured turtle from the ocean.

Immediately they could tell her front-right flipper was badly damaged – possibly as a result of becoming entangled with a ‘ghost’ net, according to the group who rescued her.

The gruesome injury was quickly reported to marine biologists on the mainland, who rushed to a nearby hotel where they could take care of the turtle.

As she was handed over by the researchers, the marine biologists rushed her off for treatment by sea plane to the Olive Ridley Project Marine Turtle Rescue Centre in Baa Atoll.

There she was x-rayed, and had her front flipper amputated such was the severity of the injury.

But after an extensive rehab program lasting four months, she was finally released back into her natural habitat.

Nick Holton, a volunteer aboard the ship researching whale sharks, who documented the turtle’s rescue, said: “We were on the lookout for whale sharks as part of an important programme when we came across the gut-wrenching but all too familiar sight of an injured Olive Ridley sea turtle flapping helplessly at the surface.

“The team and some friendly locals guided the turtle to the edge of our dhoni and we hauled the 30kg turtle on board.

“The problem was immediate – the female turtle’s front-flipper was hanging by a thread.

“The injury was really gruesome and was most likely the result of an entanglement with a ‘ghost’ net.

“Once we got her on board, we needed to keep her cool, calm and wrapped up in order to protect her from further damaging herself.

“We contacted a nearby resort and arranged to meet the resident marine biologist.

“The turtle was identified as Thomas, named so after Thomas’s School in Battersea, London, who had adopted the turtle.

“After 30 minutes journey across the lagoon, we came to *Lux Resort where the biologist was awaiting our arrival.

“Back on dry land, we carried Thomas along the jetty to the shade.

“As well as taking ID photos, Thomas was weighed and measured by the team, and we made contact with a local rescue center & arranged for collection by sea-plane.

“She was taken by sea-plane to the Olive Ridley Project Marine Turtle Rescue Centre in Baa Atoll with a good chance of being re-released into the wild.

“After being assessed by x-ray, she sadly had to have her flipper amputated. But amazingly after a lengthy rehabilitation program she was able to swim again.

“This meant that after four months, she was able to be released back into her natural habitat!

“While this story had a happy ending, not all are as lucky as Thomas and many drown or are seen as easy prey to larger predators when they become entangled and exhausted.

“Ghost Nets are discarded or lost fishing gear. Although the use of fishing nets is banned in the Maldives, ghost nets drift into Maldivian Waters from other countries around the Indian Ocean in large numbers and make this sort of heartbreaking incident all too common.”

Incredibly, research by The Olive Ridley Project has identified 863 incidents of entangled sea turtles in Maldivian waters – highlighting the severity of the problem in such a small area.

To date they have successfully treated 92 victims at their rescue center.