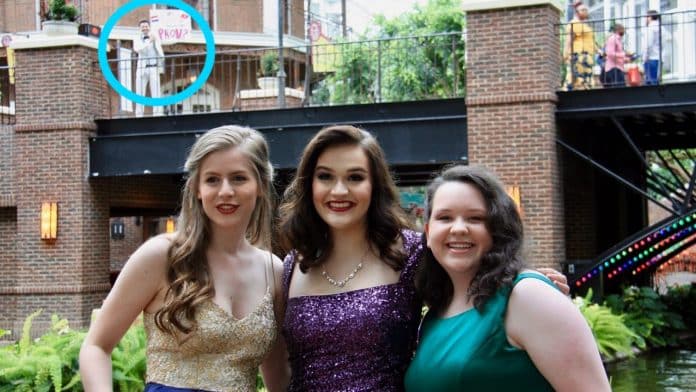 Marybel Lindsey was left in a state of shock when she turned around to see Oeds de Boer holding a cardboard sign asking her to prom, completely unaware he would be traveling to the school from his native Netherlands.

Oeds, from Friesland, met Marybel while he was an exchange student and she a freshman at McGavock High School in Nashville, Tennessee, and the pair have been in a long-distance relationship since.

He dressed in an all-white tux and stood on a bridge behind Marybel and her friends while they posed for a prom photo.

Then, having shown Marybel, 18, the photo with Oeds, 20, in the background, she turned around open-mouthed in disbelief before running into Oeds’ arms.

The whole plan for the May 3 surprise had to be kept under wraps by Marybel’s family and friends, with the teenager’s mother, Melissa Lindsey, playing a key part in the organization.

Melissa said: “I knew this was going to be the most romantic night of her life so far, so in that way it was easy not to tell.

“I was emotional – I’ve always suspected these two had something special, he makes her so happy and to see her at the height of that happiness was really heartwarming to me.”

The couple hope to stay together with Marybel considering starting her college education in the United States and finishing her studies in the Netherlands.

Marybel said: “I hope people see this story and know that if you have something that’s worth keeping, a relationship that makes you so happy and is healthy for both of you, you have to make an effort to keep it alive.

“The best things in life are worth working hard for, even if you have bad days.

“In the end, when you’ve overcome your obstacles, you’ll be so glad that you fought so hard in the first place.

“I am very blessed to have this loving community around me.

“I am especially thankful that I have Oeds, and I hope everyone else gets their Oeds in their lifetime.”