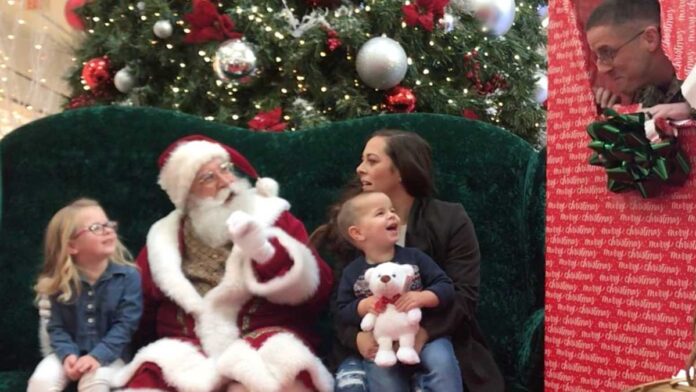 A Navy officer surprised his two kids on return from deployment with a little help from Santa Claus.

Chris Shaw planned the big surprise – which Santa was in on – for his two kids, Lillian, 4, and Henry, 2, after returning from a seven-month deployment onboard the USS Boxer.

With the 36-year-old’s children sat with Santa and mom Bridget, 33, in Pheasant Lane Mall, New Hampshire, Chris had already snuck inside a giant present to their left.

The children were oblivious to what Chris had in store as they took part in their annual visit to see Santa at the mall’s Christmas grotto photo experience.

And as Lillian and Henry chatted to Santa about what they would like for Christmas, they told him they wanted ‘Daddy’ home for Christmas.

On that cue, Chris rips open a giant present next to the kids and emerges to greet his amazed children.

Lillian shouts, “Daddy!” as onlookers struggled to hold back the tears, while Henry looks on in amazement as his dad stands before him.

READ MORE LIKE THIS: Girl Surprised With Christmas Adoption By Family Who Took Her In During Hour Of Need

The Shaw family lives in California, but Bridget is originally from Chelmsford and had been staying with her family in the area near the mall while Chris was deployed.

Chris, who is an Air Controlman First Class with the Navy, had been deployed onboard the USS Boxer for the previous seven months and wanted to surprise them on his return on November 16, 2019.

Bridget said: “I was excited and a bit nervous!

“Our friends and family cried.”

“Our military members sacrifice a lot being away from their families.

“And our military kids are so resilient moving all over the world and dealing with so much change.

“I am so proud of them. And we are so thankful for our families for helping us with everything in Chris’ absence.”