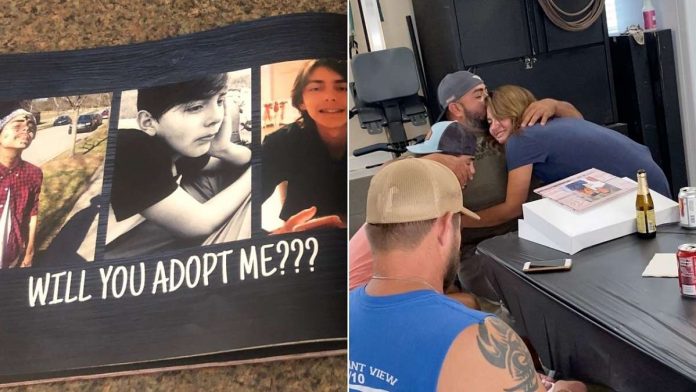 A military stepdad was surprised with a book containing memories from his stepchildren – only for him to turn the page and see a loving adoption request.

Noah Webb, 16, and his sister Amanda, 18, had always seen Christopher Anzaldua, 43, as their father, after he raised them both since they were just infants.

When Amanda turned 18, she decided that she wanted Chris to officially adopt her, so she liaised with Noah in secret to see if this might be possible.

Noah, like Amanda, had only ever seen Chris as his father, as his mother, Gina, 41, had separated from his biological father while she was pregnant with him.

After Gina heard her kids’ request, they began putting together a book of Noah and Amanda’s memories with Chris, picking a date to surprise him with it at their Texas home.

Noah and Amanda originally planned for the surprise to take place at Christmas, but the siblings were so excited, Gina said, that they decided to move the presentation forward to September 13.

With friends and family gathered for lunch, Chris – who recently retired from being a flight critical care paramedic in the U.S. Army after 22 years of service – was presented with the box.

Inside the box was the book Amanda and Noah had been working on, and when the 43-year-old began reading through his stepchildren’s notes, looking at the accompanying pictures, his eyes immediately began to well up.

A friend of Noah’s, Houston Hudspeth, happened to capture the moment on video, sharing it on TikTok to a viral response of millions of views.

Gina said she and her family did not expect such a loving response, with friends from California and beyond saying they happened to come across the viral post.

Gina, who married Chris in 2009, said: “The surprise came from my daughter – she had turned 18 and wanted Chris to finally adopt her, and she wanted his name.

“She talked with her brother, Noah, about the situation, and he agreed and said he would love it.

“They then started to put the book together and picked a day.

“They wanted to do it on Christmas, but they were so excited they didn’t want to wait.

“Chris had been waiting for that moment for years.

“I moved out of my seat so Noah could sit next to Chirs and so nobody would see me crying in the background.

“I never thought in a million years the video would reach so many people.

“My message to everyone out there with a split family is that there are men who want to be the dad and the father – they step up and fill the emptiness in your kids’ hearts.”