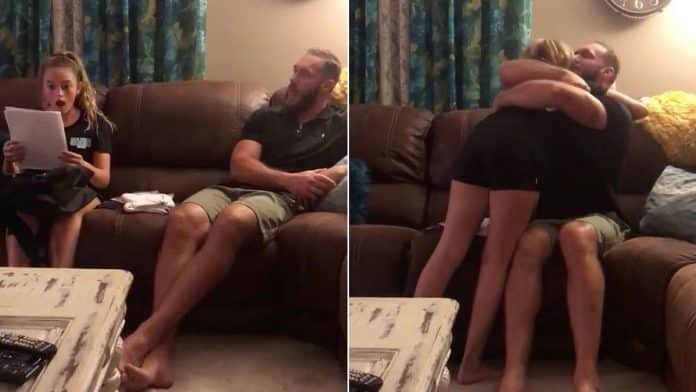 A doting Marine left his stepdaughter speechless when he surprised her with adoption papers hidden in her backpack.

Ariane Yocum, 12, thought she was receiving a new travel bag from the volleyball team she plays for when stepdad Drew Yocum, 32, presented it to her in the family’s Palm Harbor, Florida, home.

But, after rummaging inside the backpack, Ariane pulled out the items one by one such as kneepads until she uncovered one unusual item at the bottom – a set of papers.

A perplexed Ariane pulled out the piece of paper that was tucked in one of the pockets and, on further inspection, the speechless 12-year-old turned open-mouthed to Drew and simply exclaimed, “Adopted?!”

The papers detailed Drew’s application to adopt Ariane – known as Ari – who he says has always felt like his daughter, having raised her since she was a two-year-old.

Since then, he has not only been Ariane’s stepfather but also her volleyball and basketball coach since she was 5 – and so a backpack of sporting gifts seemed an ideal present to disguise the adoption papers in for the big reveal.

Drew said he struggled to hold back the tears during his October 24 surprise.

Mom Ashley admitted she and Drew have struggled to have children of their own following a series of miscarriages and so, to Drew, Ariane is his, no matter what the blood.

Having shared the video online Ashley received a swell of positive responses.

She said: “I knew Ariane was going to be excited once she saw the papers because I know how much she loves him – but I had no idea she would be this speechless!

“I was so happy that her reaction was the way it was just because Drew deserved it.

“He tried so hard to hold back the tears.

“Drew and I have not been able to have children of our own and have had multiple miscarriages, but, in his eyes, Ari is his no matter the blood.

“The message I would like for this video to show is even in the world we live in now there are happy stories like this out there and these are the kind of stories that needs to be shared.

“These types of videos give people hope in the darkest of times.

“Also, for the moms going through hard times, there is someone out there that will love your child as much as you do – it’s all in God’s timing.”