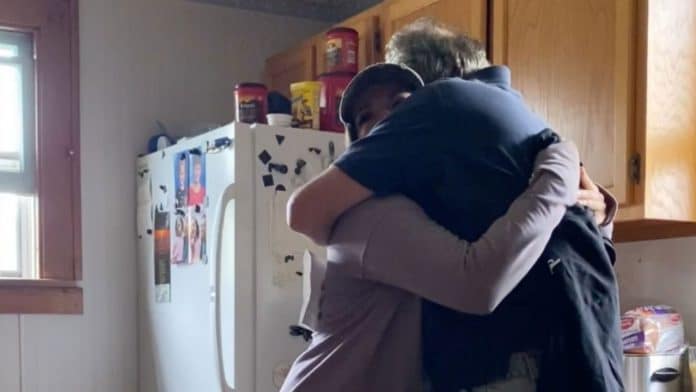 A woman surprised her loving stepdad with an emotional adoption proposal following the death of her mom which left her legally without parents.

Ariel Gray, 28, had been in contact with her stepfather Calvin Schager every day since her mother, Diane Gray, passed away from metastatic breast cancer in September 2019.

Calvin, 54, had been part of Ariel’s life since she was 12 and their bond had grown so much, she knew she wanted Calvin to become her legal father.

At Calvin’s home in Egan, South Dakota, Ariel presented Calvin with a letter, which explained her love for him and the decision she had decided to make.

Calvin started to well up as he read through note, and as he reached the end, Ariel showed him a t-shirt that read, “You’ve been the dad I’ve always dreamed of. Will you be my dad forever?”

The loving moment took place on May 17, and since courthouses in their area have been closed due to COVID-19 restrictions, the pair hope to make the adoption official soon.

Ariel, whose biological father lost custody of her when she was young, said: “I was nervous, but I knew he would say yes.

“I wanted to document the surprise because this moment meant a lot to me.

“Mom would have been very proud.

“I never thought to ask but since legally I don’t have parents, I thought this was a way to make it even more official, even though he’s always been there for me like a dad.

“Adoption doesn’t have to be when you’re under 18, it doesn’t even have to be legal for me – your family regardless of blood is who has been there for you like family.”