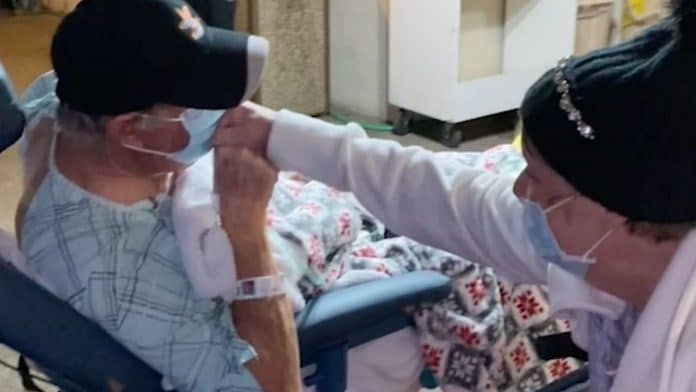 A cancer-suffering veteran and his wife were finally reunited after being apart for the longest time since the Vietnam War due to contracting COVID-19.

As Bobbie Mills, 79, was wheeled out of his ambulance on January 12, wife, Carol, 74, was eagerly waiting for him, having previously not seen her husband for some 28 days.

Thanks to a transfer between hospital and rehab center, a small window of opportunity was opened for the couple the briefly see each other.

And the emotion immediately became too much for Carol, who started to shed tears of joy and relief as she caught sight of her husband at Orchard Post-Acute Care, in Fresno, California.

As he got closer the pair immediately reached out to hold and kiss each other’s hands, emotionally telling the other how much they missed each other through tears.

The previous month had been an emotional rollercoaster for the couple and their kids – Dena, 50, Tammy, 52, and Debbie, 55 – who, at points, believed they may lose both of their parents.

Bobbie suffers from Multiple Myeloma, having been exposed to Agent Orange during the Vietnam War and as a result was required to undergo a year’s worth of chemotherapy, leaving him immunocompromised.

On December 10, the family received news that Carol had tested positive for COVID-19 – a diagnosis that ssaw her taken to ER having also shown symptoms of pneumonia.

RELATED: Veteran Who Suffered Accident, Lost Memory and Regained It Again in the Middle of the Pandemic Finally Gets to Reunite With Beloved Dog He Remembered

And then five days later, it was also confirmed Bobbie had COVID-19, with both he and his wife seeing their conditions rapidly decline.

On numerous occasions, the family said doctors were considering putting Bobbie on a ventilator, as he was later confirmed to have a diagnosis of double pneumonia.

Each time the family received a phone call they admitted they didn’t know if the news would be good or bad.

Miraculously, Bobbie’s oxygen signs started to improve a little over a week after he had been diagnosed with the virus, and, on Christmas Day, Carol got the news she could head home.

Due to his cancer fight, however, Bobbie remained in hospital for a further three weeks.

Ahead of his January 12 birthday, the family received news Bobbie was set to be moved from hospital to a rehab center where they could briefly see him.

The moment was captured on camera by Bobbie’s daughter, Tammy, who later shared the video online to an outpouring of loving messages from friends and strangers alike.

RELATED: Girl Reunites With Dad After 10 Months Apart Due To COVID Restrictions

Carol and the family then started counting down the days until Bobbie would eventually return home on January 22 – a full 40 days since he was taken to hospital.

The family literally rolled out the red carpet for his homecoming, where once again Carol was eagerly waiting to for him and this time was able to give him a proper hug.

The couple will celebrate their 56th wedding in February 2021.

Tammy, from Mission Viejo, California, said: “These two are inseparable – our parents are the perfect example of a happy life and an incredible marriage.

“Seeing them touch for the first time had us overcome with emotion we can’t imagine them separated even for this long.

“Almost every day we spoke to them while in two separate hospitals, they always asked about each other and wanted to send their love – they couldn’t wait to get home.

“We thought several times during these past weeks that we would lose our parents on the same day.

“If anything were to happen to one of them, we don’t know that the other would survive.”