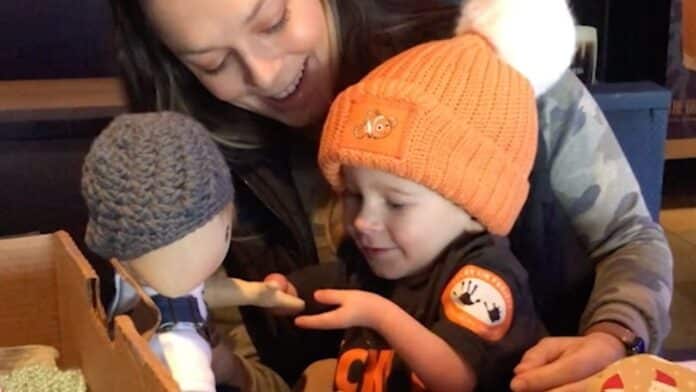 A two-year-old born with a “nubby” on his right arm and two fingers on his left beams with joy as he opens a gift to discover a doll that looks just like him.

Luke Simpson, from Oxford, Michigan, couldn’t stop smiling as he looked at the doll and touched the ends of its arms, realizing they were just like his.

When his parents were told he’d be born with limb differences, they contacted The Lucky Fin Project, a non-profit raising awareness and celebrating kids, individuals, and families affected by limb differences.

READ MORE: Baby Born Without Arm Has Beautiful Reaction to Trying on Her Prosthetic for the First Time

Luke’s mom Payton contacted The Luckily Fin Project during her pregnancy, as a way of finding peace and to gain some insight about what everyday life for Luke would look like.

Payton said Luke is the same as any other kid and when she was pregnant with her next child during the summer of 2021, she decided to get Luke a doll so he could practice being gentle with it.

While Luke played with the doll, however, his older sibling pointed out that the doll did not have a nubby or the same color eyes as Luke, which got Payton thinking.

She reached out to Molly Stapelman, founder of The Lucky Fin Project, to ask if she happened to know of any companies that could make a custom-made doll with such alterations.

Molly was able to have a company create one that looked just like Luke, and on December 23, in Birmingham, Michigan, the mom’s met up and Luke was presented with his gift.

When her son smiled as the package was opened, Payton knew it had all been worth it – Luke even noticing the smallest of details as he played happily with the toy.

Payton, 28, said: “My heart was in my throat – it’s very hard to find words to describe it we were beyond excited to see the pure joy he felt when he realized the doll looked just like him.

“Luke loves his doll he looks at it with the same joy he did that first day and loves showing it off.

“Inclusion and representation matter – Luke doesn’t know what either of these words mean but you can see what the feelings mean to him when you watch his reaction in the video.”