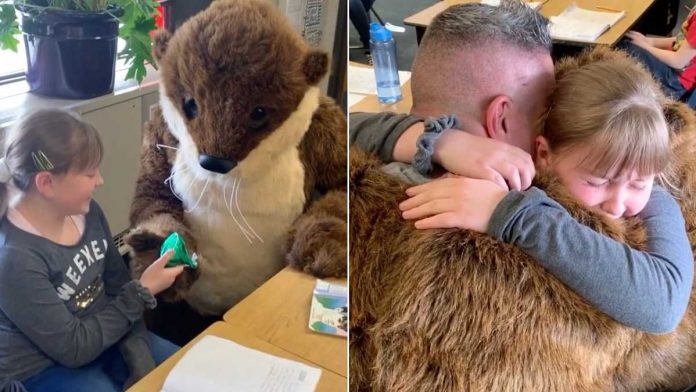 A stunned fourth grader was brought to tears when her Air Force sergeant stepdad suddenly emerged from her school’s mascot’s costume to surprise her after a year overseas.

Sgt. Matt Phelps had been serving in South Korea since early 2019, but on February 12, having returned to the U.S., he decided he would surprise his stepdaughter, Kaitlyn Foley, to make-up for the time together they had lost.

At Sunrise Elementary School, in Widefield, Colorado, Matt, 36, dressed as the school’s mascot, an otter, before entering Kaitlyn’s classroom.

The otter was holding a giant Hershey’s Kisses – an item which held significance, as before he left, Matt had given Kaitlyn, 10, regular-sized Kisses; one for each day he would be away.

The otter then approached Kaitlyn and, in an emotional moment that was caught on video, Matt then removed the mascot’s head to reveal his true identity.

Kaitlyn immediately burst into tears and dived into her stepfather’s arms.

Matt’s wife, Kelly Phelps, 37, is a teacher at the school, and so helped organize the surprise for her daughter.

Kelly said: “I couldn’t wait until I saw the smile on her face when she would realize it was him and that he was home.

“It was super difficult keeping the news of his arrival a secret from her.

“Kaitlyn missed Matt so much.

“We were fortunate enough to talk to him daily and she slept with a bear that has a security forces uniform.

“Before Matt left, he gave her a jar with 365 Hershey’s Kisses in it so that she would have a kiss a day.

“She had something to look forward to and it was a great way to visually see how much time was left.

“Military life is difficult, but people need to remember to enjoy the good moments – there are lots of them.”