Home Good News Premature Baby Discharged From Hospital After 156 Days, But Dad Has One... 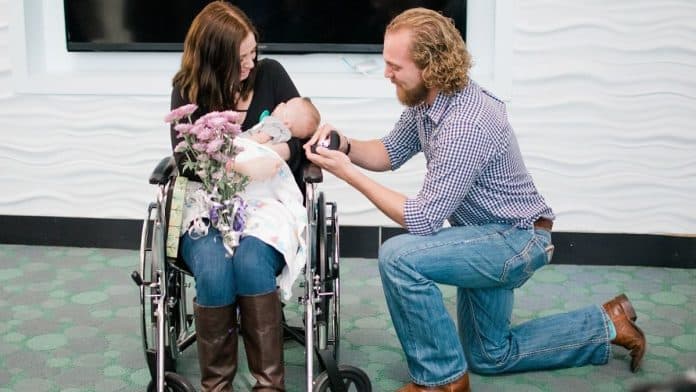 After becoming pregnant with her first baby, Regan Daugherty was hospitalized with pain in her back and sides.

She and boyfriend Dillon Fitts visited a fetal specialist who spotted issues with the pregnancy made worse by the baby’s already slow growth, deciding the baby had to be delivered by emergency C-section after just 25 weeks.

Baby Ezra was born on November 6 weighing just 14 ounces and over the next 156 days, the young family stayed in the hospital with four separate trips to the operating room as Ezra was kept on support.

Finally, they got the news they were waiting for, that they could take Ezra home and were discharged from the hospital, capturing the moment they left on video.

As the young family leave the NICU, dozens of nurses come over to give them an emotional embrace and say goodbye, with plenty of tears being shed.

When they reach the hospital doors, the young family are greeted by friends and family – but that’s not even the biggest surprise for Regan before she leaves.

Watch the video to see what happens next.