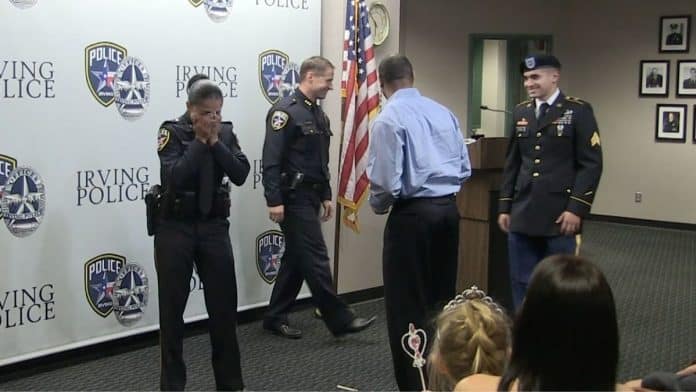 A police officer burst into tears at her swearing-in ceremony when she discovered her military son who she hadn’t seen in two years would be pinning her badge.

Officer Erika Benning of the Irving Police Department, Texas, immediately covered her eyes in shock as she saw her son, Sergeant Giovanni Pando, appear from around the corner.

Sgt. Pando, 21, had been stationed overseas with the US Army for the previous two years, but wanted to do something extra special to surprise his mom, who had wanted to be a cop since she was a child.

Benning said she had not heard from her son for a week prior to the ceremony, as he wanted to keep things a secret from her.

Comforting his emotional mother on stage, Sgt. Pando then pinned the badge to her uniform so that she could be sworn in.

The video was shared by Irving Police Department on January 31.