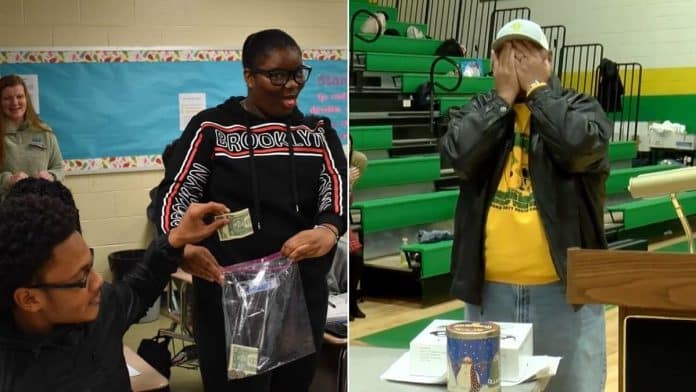 A blind die-hard high school football fan was brought to tears in front of an entire faculty when pupils surprised him with a pair of life-changing glasses that would allow him to see.

Michael Clinton – who was diagnosed with macular degeneration, an eye condition that causes vision loss – covered his eyes and sobbed uncontrollably as pupils at Richmond Senior High School in North Carolina presented him with the gift.

When he put on the eSight glasses on, an emotional Michael, 66, was suddenly able to see a gym full of those who had made the gift possible, high-fiving the school’s sports stars in celebration.

The surprise itself took months of planning before the December 20 reveal.

In April 2019, Michael had attended an event that allowed him to try on the electronic eSight glasses, which aid the visually impaired and help counter more than 50 eye conditions.

Michael discovered he was the perfect candidate, but with a price tag of around $6,000, there was no way he could afford a pair.

However, present at the screening was Mary Sedgewick, who lost her sight in 2002 and is a friend of Michael, and Ann Wheeler, whose daughter, Shanda Roberson, works at the school.

Another $3,000 match was promised by Knights of the Blind, a chapter within the local Lions Club.

Within just a couple of weeks the school had raised more than $2,000, hosting pizza parties and asking students to give up their spare change, before the total eventually reached around $4,500.

Michael has suffered from Leber’s hereditary optic neuropathy, a degenerative eye disease, since he was 39, and the school hoped that purchasing the glasses will improve his quality of life.

During the presentation, Mary Sedgewick, an eSight wearer herself, was present to hand Michael the glasses, bringing the surprise full circle.

The additional money raised, the school said, is now going towards a fund for an 11th grader who, around the time of Michael’s presentation, discovered that he could be a candidate for the life-changing glasses, too.

Speaking of the moment Michael received his gift, Shanda Roberson said: “I cannot describe to you what it felt like to watch Mr. Clinton receive the gift of eSight.

“I can tell you that never in all of my years have I experienced this type of joy of giving.

“There were very few dry eyes in the auditorium.

“Everyone was overwhelmed, elated, and beyond joyful.

“I hope that others are moved to help others in need.

“I want others to feel the same joy that the Richmond Raider Community felt when we presented Michael with his glasses.

“I want others to know that just a little, whether it be money or effort, can go a long way in helping bring joy to the life of another human being.”