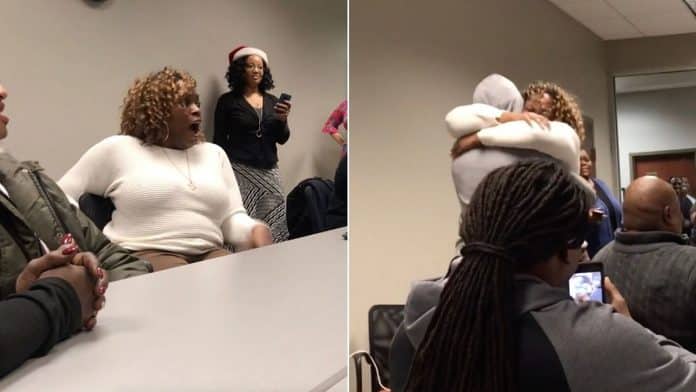 A stunned mom leaped out of her chair with joy when she suddenly realized her Navy son, who she had not seen for a year, was sitting opposite her in a business meeting.

Nakesha Brown, 44, sat through the business meeting totally unaware of the identity of the person sitting directly opposite her.

Ezekeil, a third class gunsman with the US Navy, had been away for around a year, having moved to San Diego, California.

On December 19, 2019, as the person presenting said, “I want everyone to take a look at the person sitting across from them right now,” things began to click for Nakehsa.

She had questioned why the meeting at ATL311’s headquarters was even taking place, as staff had arranged the gathering specifically for the surprise.

Then, as she looked beneath Ezekiel’s hoodie, the 44-year-old let out a huge scream – the room erupting into cheers.

Nakesha then made her way around the table to embrace Ezekiel before crying in his arms.

What made the day more emotional, Nakesha said, was the events of the past 18 months.

In 2018, the same year Ezekeil went into service, she lost her oldest son, and nine months later her brother also died.

Speaking of the surprise reunion, Nakesha said: “I didn’t know what was going on.

“I was little confused about the reason for the meeting I was attending – however, we have meetings all the time, so it wasn’t out of the normal to have a meeting.

“When I saw Ezekeil, it gave me love, peace and happiness that I haven’t had in a long time.

“I thought about my oldest son because he used to say love, peace, happiness when I had a bad day.

“Having Ezekeil home was the best feeling in the world.”