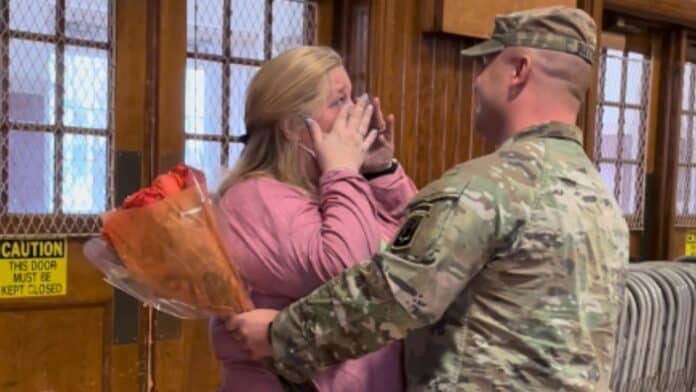 A teacher who thought she was simply partaking in a Lost And Found Day at her school suddenly cried happy tears when the last item to be found was her military son, who had returned home from Iraq to surprise her.

Cheryl Pletsch, 54, had not seen her son, Staff Sergeant Jake Pletsch, 24, of the U.S. Army, for more than a year.

Jake’s journey started in March 2021, when he headed off to Fort Bliss, in Oklahoma, and then on to Fort Still, in Texas.

Following his stay in Texas, Jake was then deployed to Erbil, Iraq, for nine more months.

When he discovered he would be returning home, Jake contacted his sister, who liaised with staff to plan the faux-Lost And Found Day on April 1.

Cheryl, who had no idea about the surprise, stood at the back of the gymnasium at lunch as the items that had been found were revealed to pupils.

Then, for the final item, Jake appeared on the stage from behind the curtains, before heading through the sea of cheering children to give his mom a long-awaited hug.

READ MORE LIKE THIS: Mom Thought Military Son Couldn’t Make Wedding Day… But Her Hero Never Let’s Her Down

Speaking of the moment, Cheryl said: “Jake knew the dates he was coming home, so he told me different ones so I would be surprised.

“He wanted to make his homecoming special, so he worked with his sister Jacquelyn and my co-worker Stacey – they got everything set up at the school.

READ MORE LIKE THIS: Retiring Teacher Surprised By Pupils At Disney

“I was in shock. They totally surprised me.

“I can honestly say it was one of the best surprises I had ever received.

“What made it more special was being able to share that moment with so many people.

“I think the children were also in awe.”