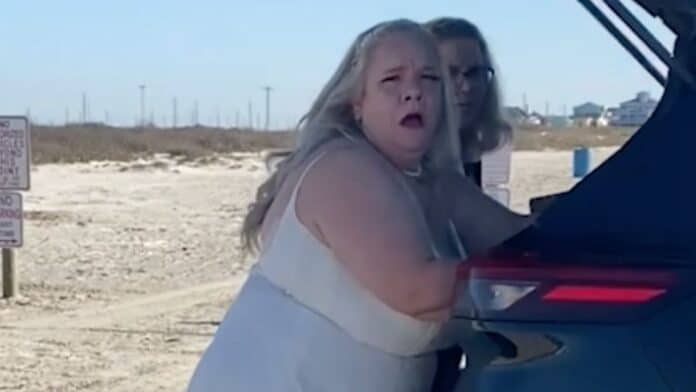 A military son who sent his mom a Build-A-Bear of himself on her wedding day because he “couldn’t make it home” surprised her by turning up and walking her down the aisle.

Robert McClaughlin, known as Junior, had been away from his mom Lois, who lives in Texas, since he was deployed to Washington State in February 2021.

Ahead of Lois’ big day, Junior did everything he could to be in attendance – and when he got the news that he could travel for the March 13 ceremony, he decided make it a surprise.

Junior headed to Build-A-Bear, where he created a solider themed teddy that family members could give to Lois on her wedding day, so that she would only think he could be there in teddy form.

Little did Lois know, though, Junior had arrived in Galveston, Texas, for her beach wedding.

As she was getting some items out of the trunk of her car, her grandchildren let out a shriek: “DADDY!”

The moment caused Lois to well up, and as soon as she spotted her son – who she had not seen in more than a year – she headed over for a long-awaited hug.

After the surprise, Junior was then able to link arms with his mom and walk her down the aisle on the beach.

Speaking of the moment, he said: “I’ve always been a big momma’s boy and we’ve never really been far apart since I was born, or apart for a long time.

“I knew I’d have to do everything I could to see her on her biggest day.

“I bought her a Build-A-Bear with a private message for her on her wedding day – this was to represent me on her big day since I couldn’t be there… or so she thought.

“Days before I had pre-recorded a message for her while ‘on-duty,’ which I would send to her the morning of the big day. It was a success.

“When I saw her reaction, I was speechless – I was overwhelmed with joy.

“My heart was racing, and I knew I was home.”