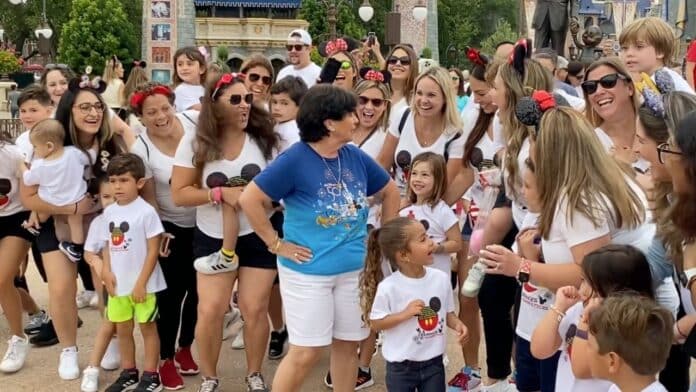 A retiring pre-K teacher was left in floods of happy tears when her pupils past and present photobombed a picture of her at Magic Kingdom.

Around 75 people were in on the surprise for Mercy Maranges, 64, who had no idea what was to come as she posed in front of Cinderella’s Castle at the Florida theme park on April 2.

Mrs. Maranges has been a teacher for 42 years – the last 33 of which had been spent at Saints Peter and Paul, in Miami, Florida.

Knowing their teacher’s love of Disney, her class and their parents asked if Mrs. Maranges’ daughter, also called Mercy, could help arrange a surprise for her at the Magic Kingdom.

Mrs. Maranges and Mercy headed to the park in a small group, and on the way, Mercy asked her mom if she would pose in front of the castle to have a photo to celebrate her retirement.

As they stood in line and waited for the iconic shot, Mercy texted the other moms, who then snuck into the photo with their kids, all wearing the same customized Disney t-shirt to celebrate the occasion.

“I knew that she would be overwhelmed and so surprised.

“I was crying tears of joy as I witnessed so many people be there for her.

“There’s been an overwhelming reaction with beautiful heartwarming comments.

“From former students to people that don’t even know her all have reacted beautifully.

“I hope others see how impactful a teacher can be to a child.

“My mother has been molding lives for over 40 years and it definitely has made a positive impact on both her students and parents.”