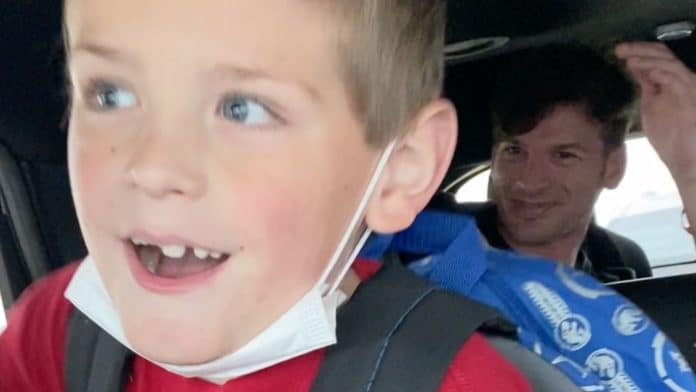 A son couldn’t believe his eyes as he peered over the back seat of his family’s SUV looking for a surprise to discover his military dad had returned home after a year in the Middle East.

When Joseph Frey, 29, left for active duty in Kuwait, the global pandemic was just beginning to take hold.

But as the months went on, Joseph, a chief air defense artillery warrant officer in the U.S. Army, was left wondering when he would be able to come home, as the coronavirus meant there was no mid-duty leave.

The separation was tough on Joseph’s son, Phillip, aged eight, who was at home with his mom, Nicole, 29, where they currently live in Oklahoma.

At last on April 14, however, Joseph was finally back on U.S. soil, and so he and Nicole drove to Phillip’s elementary school at the end of the day.

Before Phillip was set to walk out the front doors, Joseph asked Nicole if she thought he should surprise his son, quickly climbing over the back seat and into the trunk.

READ MORE LIKE THIS: Military Dad Surprises Son During Nerf War After Deployment

As Phillip got in, he asked Nicole why she was recording to which replied, “I got you a surprise,” sending him to excitedly look around the interior.

Then, as Phillip turned to face the back of the vehicle, his father popped up from behind the backseat, causing a loud scream of “DADDY” as he too climbed into the trunk for a hug.

Nicole, who captured the moment on video, said: “I was very excited – it’s been a hard year emotionally for our family, and I knew a lot of emotions would bubble out for all of us.

“Phillip is very emotional and wears his heart proudly on his sleeve and loves his dad so much,

I was so happy for him.”