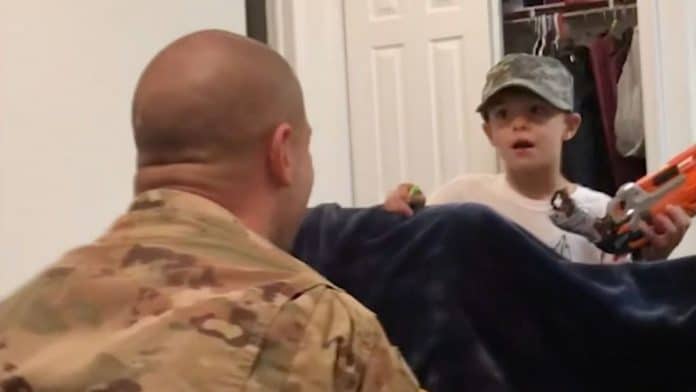 A boy thinks he’s in an epic Nerf Gun war with his mom – only to discover the person firing back at him is his soldier dad who has been on deployment for almost a year.

In the emotional video Chase Pandorf, aged seven, gets into position while mom Danielle Milano films and heads back to her side of the room.

But little did Chase know that there was a surprise waiting on the other side hidden from view.

As Danielle moved behind her cushioned barricade, looks around the corner to reveal Chase’s father, Joseph Pandorf, hiding round the corner and swaps places with him for the Nerf battle.

READ MORE LIKE THIS: Kids Reunited With Military Dad After More Than 500 Days Apart

Joe kept a low profile while firing over the sofa cushions, then, when Danielle told Chase to come over the youngster moved the barrier to reveal his dad waiting for him with open arms.

Completely Stunned, Chase froze open-mouthed on the spot, before letting out a scream of “Daddy!” and falling into his father’s arms in floods of tears.

Joe said: “He thought I was still away – it was a total surprise.

“His reaction was just utter shock, he froze for about four seconds and dropped his dart – that was the best part.

“Seeing him was the best moment of my life after being away from him for a year.”