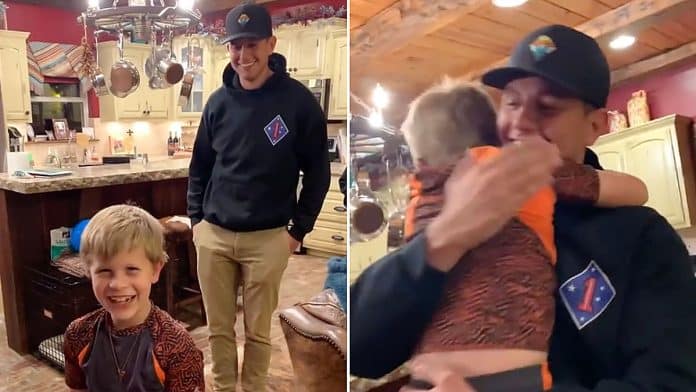 A U.S. Marine surprised his kid brother after returning home from active service for good.

Parker Perner had just finished active duty and hadn’t seen his Kid brother in a year.

The Marine – who was deployed twice on long stints visiting several countries – decided to spring a surprise visit on his brother Cash.

With the help of their mom Kim, she gave eight-year-old Cash a surprise, which she billed as a reward for doing well at school.

With a blind fold on, Cash can be seen eagerly awaiting his gift with his hands outstretched.

But suddenly in the background, his older brother Parker, 23, can be seen tiptoeing into the room clutching his Marine’s cap.

As mom Kim says she’s about to put the surprise gift in Cash’s hands, Parker reaches over and drops his hat into his palms.

As Cash removes his blindfold, he’s amazed to see his older brother’s cap, and looks over the moon with the gift.

But just as he thinks that’s the end of it, his mom asks whether he likes it, to which Cash replies enthusiastically: “Yeah!”

Kim then says: “Is that a good surprise? Do you like that surprise?” And points behind Cash, where his brother Parker is standing.

A shocked Cash falls backwards, before leaping to his feet and embracing his brother in a teary reunion hug.

It was the first time he had seen his older brother in year.

Kim, who filmed the reveal at the family home in Mounds, Oklahoma, USA, said the duo had always had a strong bond – and only seen each other a couple of times during Parker’s four-year active service.

She said: “Parker and Cash are extremely close – they have always had a very special bond.

“It’s always heart-breaking to see them say goodbye [when Parker leaves for duty] and so very heart-warming every time there was a reunion.

“Cash was always too young to really understand why Parker had to leave and would be in tears.”

And Kim revealed it was often tough to keep the secret of Parker’s homecoming a secret from Cash.

She added: “There were a few times I almost let it slip, but luckily I always recovered it in such a way Cash never had a clue.”

The idea to surprise Cash with Parker’s Marine cap – also known as a cover – was dreamt up by Parker.

Kim explained: “The pair’s other older brother, Tanner, was at the house and the idea was to blind fold Cash and to let him think he’s getting a surprise for making good grades at school.

“Parker had the idea to place the ‘cover’ into his hands and see if he could guess the shape of it.

“It really went way better than we expected.

“We figured once he saw the cover, he would figure it out that Parker was there – but he still didn’t know.

“He was just so happy to receive Parker’s cover thinking that was his reward for good grades and as you can see, he loved it!

“When he finally turned around his reaction was priceless and even better than we imagined.

“My emotions were very high as well seeing the emotion between the two as they hugged. It was such a touching moment and a wonderful day.

Parker’s active service included one deployment on the U.S.S. America and another deployment that took in several countries around the world.