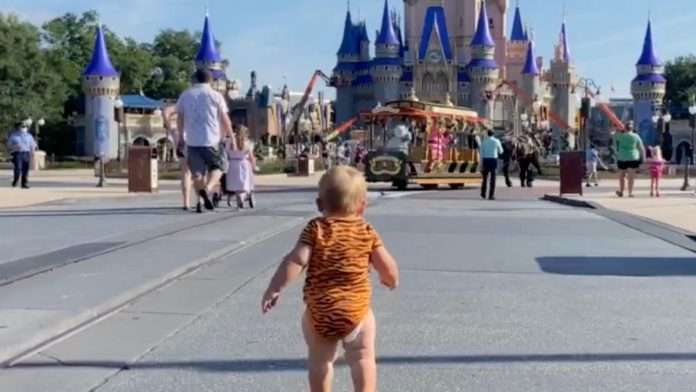 An enthusiastic toddler and avid Disney fan was able to take his first steps inside one of its parks recently, joyously strolling down Main Street, U.S.A., in Magic Kingdom, Florida.

In the adorable video, 15-month-old Andy Wells can be seen dressed in his Tigger outfit as he bounds toward Cinderella’s Castle.

Andy, a Florida native, loves all things Disney, his parents Tim and Natalie Wells said, and for months when he was younger, he would visit the park with his parents.

As Andy was learning to walk, Tim, 35, and Natalie, 34, said they were eagerly awaiting the day their son could take his first steps in one of the Disney World Resort Parks – but then the coronavirus pandemic hit.

Due to the park closures, Andy’s big moment had to be put on hold until July 15.

Tim said: “Andy is a little ham – loves getting attention and so many people were pointing or waving at him as he walked down the street.

“He loved every second of it.

“Being the big Disney fans that we are, we were so excited to capture his first steps walking to meet Mickey Mouse.

“However, he isn’t meeting due to safety precautions now.

“But there was a trolley of characters that rode by, and Andy got so excited.

“Seeing how happy he was trying to chase them and wave to them and having the castle in the background made for a magical memory that we wanted to capture.

“The response has been great.

“A lot of people have told us how happy that video made them feel and that they couldn’t stop smiling while watching it.

“Some even commented that their hope is for their own kids or their future kids to walk down Main Street just like that.”