Home Good News Man Reunites With Father He Thought Was Dead After Half-Sibling Tracks Him... 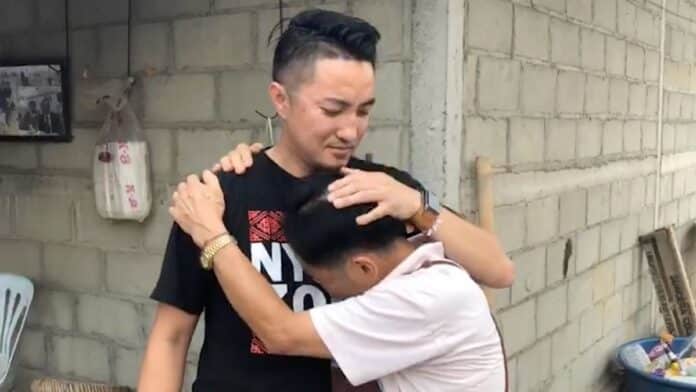 A man finally reunited with his father from the other side of the world after 33 years – thanks to his half-sister discovering him on Facebook.

Silver Young, from Fresno, California, last had contact with his father when he was an infant at Ban Vinai Refugee Camp, in Thailand, where he was born in 1981.

During the war in Laos, Silver’s parents fled to the camp, and his father, Pana Saelee, was a soldier who fought alongside General Vang Pao and the American CIA.

Having settled in the camp for a number of years, Pana, 60, was then called back to Laos for a mission to help more people flee the country – a period of time that turned from weeks into months and then years.

The family lost all connection with Pana, and believed him dead in the conflict.

And so, in 1987, Silver’s mom moved him and his two sisters to the United States in search of a better life – only for his father to return to the refugee camp a year later and find his family gone.

Silver – born Cher Peek Lee – had lost any form of contact with his father, until one day in 2013 when he received a friend request and message on Facebook saying: “Hello big brother. Hi cher peek lee. I am your sister Kao Sheng Lee. I’m your sister from Thailand. Please approve my friend request.”

The person messaging was, in fact, Silver’s half-sister, who goes by Naticha Saelee and lives Phayao, Thailand.

Silver initially ignored the message, thinking it was a scam, and for three years, despite Naticha wishing him a happy birthday and sending more queries, he did not respond.

Then, one day, Naticha sent him an edited photo of his face next to someone who looked exactly like him as photographic proof they were related.

This incredibly turned out to be his father, opening up a dialogue with his half-sister and dad over the years that followed.

Silver found out that Pana had remarried and started a new life, and he and Naticha planned for a reunion to take place in Thailand.

READ MORE LIKE THIS: Adopted American Reunites With Mother Who Gave Her Up When She Was Just Six Months In Emotional Reunion

The pair finally met in Phu Sang on April 16, 2018, and ahead of the meeting, Silver said he had a number of questions he wanted to ask his father and sibling.

When the emotional moment finally took place, however, all those thoughts went away.

After capturing a series of embraces on video, Silver later shared his family’s story online in 2021.

He said: “I was nervous and couldn’t sleep the night before.

“Most importantly, I just wanted to shake his hand and hug him.

READ MORE LIKE THIS: Adopted Son Tracks Down Biological Mom After 40 Years For Emotional Reunion

“I had a lot of questions I wanted to ask him, but as soon as I saw him, all those questions didn’t matter anymore.

“I felt like I was complete. I felt like I can stop searching now – there are no words that explain the feeling.

“You just know that person is part of you – is family.

“We talked like we’re father and son right away.

“We laughed and mostly cried.”