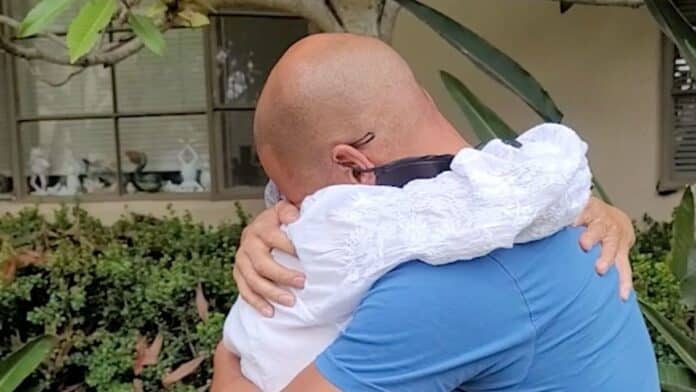 An adopted man cried in his biological mother’s arms as he was finally reunited with her for the first time after searching for almost 40 years.

Tobayi Howton, from New York City, first began searching for his birth mom in 1982, having known that she had given him up for adoption as a newborn because she was not able to financially support him.

According to Tobayi, who is now in his 50s, he had been aware that he was adopted since he was old enough to comprehend, with his adoptive father always supporting his search for his biological mom, Thomasette Cox.

When Tobayi turned 12, he wrote a letter to his adoption agency, requesting to discuss his adoption.

A letter came back, Tobayi said, but with little to no identifying information about his mom coming from the meeting that followed, he was forced to carry out the search himself.

In his 20s, Tobayi managed to track down his birth certificate, which gave him simply his mother’s last name.

Then, in his 30s, the likes of a private investigator proved to be unsuccessful, as did websites like 23andMe and Ancestry.com a decade later.

But having had a membership with DNA sampling websites for roughly two years, one day, Tobayi received a match: a cousin named Alicia, who reached out to ask if Tobayi knew her birth parents.

From there, the pair were able to piece their family trees together, which meant Alicia could put Tobayi in touch with his great aunt, who, in turn, connected him with her sister, Tobayi’s mom.

The pair talked for roughly two years, and Thomasette also carried out a DNA test which came back with the result Tobayi had been looking for: “Parent-child.”

On September 4, 2021, Tobayi flew to his biological mom’s home in Southern California, where the pair shared a loving embrace.

Tobayi initially wanted to keep a reunion video of the moment private, but after a friend encouraged him to share it with the world, he posted the footage online, hoping to inspire others in similar situations.

READ MORE LIKE THIS: Man Bursts Into Tears After Traveling More Than 2,000 Miles to Meet His Birth Mom

To Tobayi’s humble surprise, the clip soon received hundreds of thousands of views.

Speaking of the moment, Tobayi said: “As I got closer to her the only thing I heard was the sound of her voice and I was pretty much OK until she embraced me.

“The moment she touched me my entire childhood flashed through my mind.

“I allowed the little boy I unknowingly still had tucked away to have his moment, and I broke down in her arms.

“It was his moment, his day.

“The first thing I would like to tell anyone is to never, ever give up.

“My father, Theron Howton, made certain that he answered any questions that I had as best as he could and never once shunned conversation about it.

“The way he explained it to me, I always knew that my mother gave me up because she could not provide a life for herself or me at that point in time.

“I understood that she gave me up so that I could have a chance at a better life than she could provide, and to this day I am grateful for his honesty and open communication.”