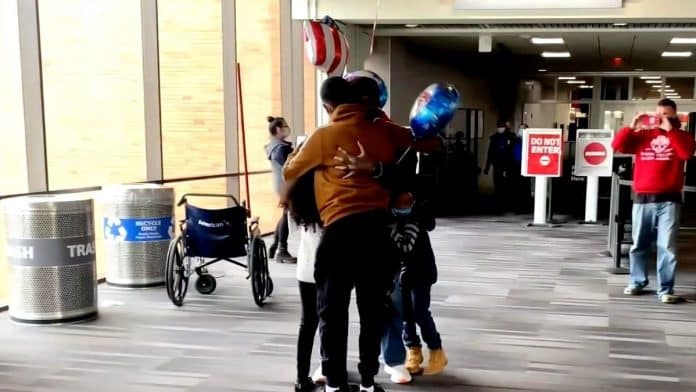 A group of siblings could not hide their delight after they were surprised with the news that they were about to meet their military father, who had been serving overseas for more than 500 days.

In total, Koffivi Ladeh-Ahlidza, 42, had been away from his family for 556 days before the February 10 surprise – a level of service that meant he missed multiple birthdays, Thanksgivings and had been away since before the start of the coronavirus pandemic.

Koffivi is a sergeant in the Delaware Army National Guard, and during his time overseas he had been based in Kuwait.

Having received the news that her husband was due home, wife Rozana, 32, said she struggled to sleep for the last two months of his deployment because of her excitement.

The pair’s children – Antoine, 12, Krystal-Rose, 8, and twins Kaiden and Anaiya, 5 – originally thought their father was going to return in March, but on the day of the surprise, Rozana told the children they were heading to a photoshoot.

As they drove in the car, though, Rozana then revealed they were, in fact, heading to meet their father – much to the kids’ delight.

In order to keep the surprise a secret, the mom of four had given her friend a number of Welcome Home banners, which she then collected at Philadelphia International Airport.

Having captured the moment when the kids found out they were soon to meet their father, Rozana continued to record as they made their way through the airport.

Then, when Koffivi appeared, the youngsters immediately ran into his arms for an emotional embrace roughly a year and a half in the making.

Rozana, from Dover, Delaware, said: “I didn’t want my kids to have any clue.

“I was so nervous when I pulled over to tell them the big news.

“My eyes filled with tears at my daughter’s reaction.

READ MORE: Familiar Voice From Outside Surprises Toddler Who yells Out For Military Dad Before Leaping Into His Arms

“When they all ran to him at the airport, it just felt like the sacrifice we made was all worth it.

“Hugging my husband for the first time in so long felt incredible.

“I didn’t recognize him at first… it took me a second.

“It was the most perfect day, better than I envisioned.

“I am grateful for all the love we’ve received.

“I will add that my husband was only supposed to be gone for 10 months.

“An opportunity came up in April 2020 where any soldier that wanted to stay longer could do so.

“My husband wasn’t for it, but when I told him to stay due to the pandemic and the state of the economy, he prayed about it and decided to stay.

“It was a very hard decision but we knew in our hearts that we were making the right decision for our family.

“This was totally an act of faith and something I hope inspires others.”