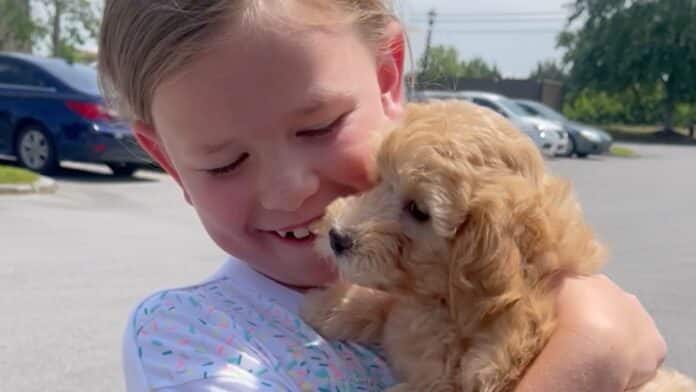 A birthday girl who has been struggling with anxiety couldn’t hold back her happy tears when her family revealed she was set to get a little puppy she has always dreamed of.

For years, Callie Webb, aged eight, has been asking for a dog of her own, but as her parents waited for the timing to be right – faced with numerous issues with COVID – and with scores of families working from home, more and more dogs were getting adopted.

Having interviewed with a breeder near their home in Maryville, Tennessee, Callie’s mom, Brooke, 40, and her husband Zack were told the waiting list could be longer than a year.

The couple kept things secret from Callie, but as she started having troubles with anxiety and issues sleeping, Brooke said they knew they had to accept the next dog the breeder had available for them.

On May 22, at Callie’s eighth birthday party in a local restaurant, her parents presented her with a letter that revealed the news she was set to have a puppy of her own.

Then, Zack showed Callie his phone, featuring had a video of a Maltipoo puppy – a cross between a Maltese and a poodle – which she was due to then collect on June 10.

She decided to name the dog June, after the month she was collected, and the family hope the new furry friend will help Callie with her anxiety and sleep problems.

READ MORE: Boy Gets a Boston Terrier Puppy For His Birthday As A Gift From His Late Father Who Arranged It Before He Died

Brooke said: “Her reaction was more than both her daddy and I ever thought it would be – it truly demonstrates her love for animals.

“We were all in tears, especially her daddy.

“This is a moment that we will never forget and I’m so thankful I captured it on video.

“She says she’s most looking forward to being able to carry her everywhere, sleep with her, and for her to be her best friend.”