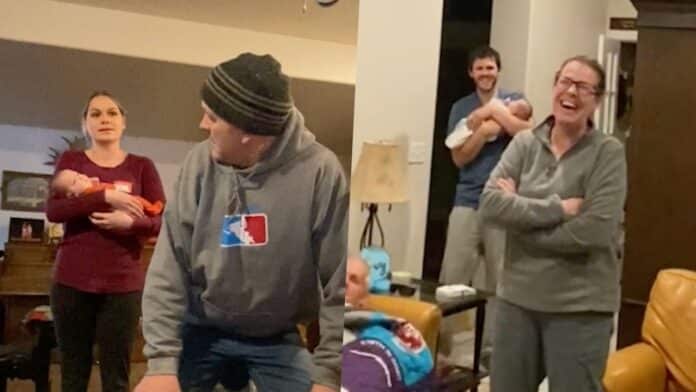 A couple shared a tear-filled collection of first-time meetings after they surprised family members with the return of their newborn baby – who had spent the first 113 days of his life in the newborn intensive care unit (NICU).

Family members can be seen letting out screams of shock in the emotional footage, with some even breaking down in tears after a tough few months.

None of them – other than parents DJ and Taylor Evans – were allowed to visit the hospital through the near four-month hospital stay.

But on February 25, when parents DJ and Taylor Evans finally left Utah Hospital in Salt Lake City, Utah, with baby Jayden, they decided not to tell anyone else and keep it a surprise.

Mom Taylor said: “Jayden has quite a fan club because he is the first grandchild, and first nephew, on either side of the family. So we just knew when he actually came home it was going to be such a big moment.”

Jayden was supposed to be born February 2, 2022, but instead, he made an emergency appearance on November 4, 2021, taking everybody by surprise, and weighing just one pound and 12 ounces.

Taylor had been feeling ill that morning and visited the emergency room.

“This was November 1, and Jayden’s due date was February 2nd the next year, so we were so flabbergasted. We were so confused.

“But thanks to the amazing medical staff, Jayden was born at 27 weeks and one day, weighing just one pound and 12 ounces.

“It was severe pre-eclampsia why he came early.”

For the next 113 nail-biting days, DJ and Taylor visited their son in the NICU every day, something which they described as an emotional rollercoaster.

Dad DJ said: “The 100 days after he was born were kind of like a pendulum. There were days when everything seemed like they were going to be great and he would be home in no time. Then it would swing back the other way and it would seem like he is going to be in there for another six months.

“Through it all that was the most difficult part. It was just the not knowing what was going to happen.

“There are so many things that are underdeveloped in an infant’s body when they are born that early. So how do you know their lungs, their brain, their eyes, their heart, their stomach, their intestines – how do you know all of that is going to be okay?

“So the uncertainty was difficult for both of us early on.”

Taylor added: “It took us a long time to feel like actual parents because we couldn’t take our baby home. It was like we were leaving him with the best babysitters in the world each day.”

After amazing work by the doctors and nurses at Utah Hospital in Salt Lake City, Utah, they were given the good news that Jayden could finally go home.

Since Jayden was the first grandchild on both DJ and Taylor’s sides of the family, he already had quite a fan club of eager family members who had only seen him through video calls.

No one other than DJ and Taylor had been allowed to see him in person due to COVID restrictions at the hospital.

Knowing what a special moment this would be now Jayden was finally going home, they decided to keep it a secret and plan an almighty surprise for their parents and siblings.

The day Jayden was discharged, Taylor and DJ headed out to collect Jayden. DJ, 27, secretly set up cameras at his various family members’ homes ready to capture their shocked reactions upon their return.

As they returned home, they surprised DJ’s his mom, sister, and father one by one, which DJ later compiled into a video showing the family’s journey and how much finally meeting Jayden meant to them.

Speaking of the surprises, Taylor, 28, said: “The reactions were perfect. We couldn’t have asked for a better reaction.

“It was such a long-awaited moment for them.

“Honestly, that’s been a little mind-boggling [seeing the responses to the video on social media.

“It’s been so fun to see how many people have replied saying they had a preemie too and that now their preemie is all grown up and thriving.

“I hope others will see this story and believe that they can also accomplish hard things.

“The NICU journey seemed so daunting at the start and there were hard days but we got through it.

“And they too can get through their hard moments.”