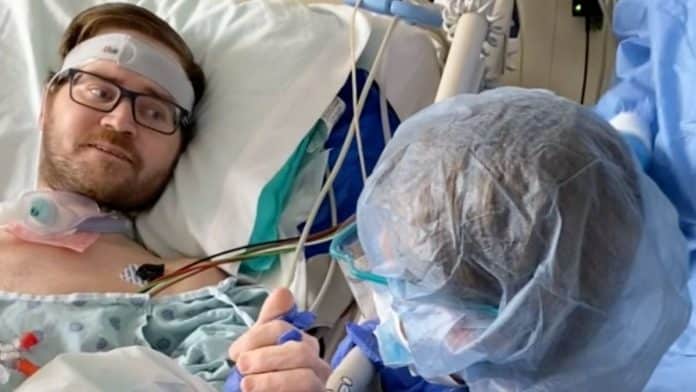 A boy was surprised on his 8th birthday with an emotional reunion with his dad who he hadn’t seen for 55 days during his battle with COVID.

Kristian Ormson, 37, from Amarillo, Texas, was hospitalized with complications from COVID on January 25, with his illness continuing to worsen over the days and weeks that followed.

Roughly two weeks after he was admitted to the ICU at BSA Hospital, Kristian suffered from a collapsed lung, and, struggling to breathe, was placed on a ventilator on February 15.

He was then placed into a medically induced coma for 13 days, before a tracheostomy was placed and doctors were able to wake him up.

By March 16, Kristian had come off his ventilator and son Corbin, then 7, told mom, Ashley, 36, all he wanted for his birthday was to see his dad.

READ MORE LIKE THIS: Elderly Grandfather Goes Viral as He Returns From Hospital Stay to Surprise Wife of 66 Years

Ashley spoke to staff at the hospital who worked on making Corbin’s dream a reality – and on March 21, nearly two months after his dad was hospitalized, Corbin was able to pay him a visit.

On his birthday he wore full PPE gear and walked into his dad’s hospital room, and as the pair made eye contact the emotion between the two was clear for all to see.

For the next couple of weeks, Kristian will be in rehab before returning home, and his family also started a GoFundMe campaign, hoping to raise money for his medical costs.

READ MORE LIKE THIS: Son Reunites With Blind Father After 3 Years Apart

Ashley said: “Seeing the two of them together was such a gift – Corbin is such a daddy’s boy and Kristian is always so patient with him.

“The response has been so loving – I knew it would resonate with people but I had no idea we would receive such an outpouring of support and prayers from people we’ve never met.”